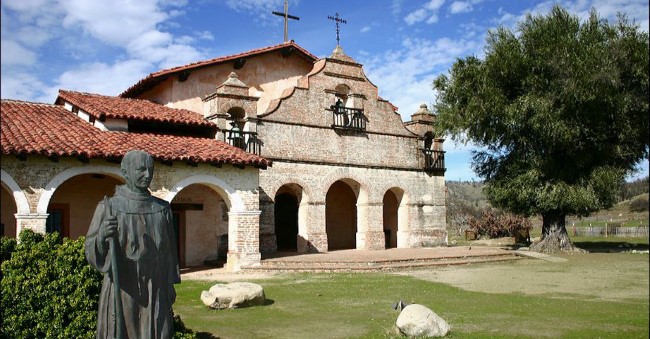 Mission San Antonio grounds offer a realistic example of life in the mission days. There are picnic tables under the shade trees to relax and enjoy the peace and quiet of the secluded area.

Mission San Antonio de Padua, established as the third of 21 missions built in California, is located in Monterey County, approx. 24 miles distance from King City and Highway I-101. Built in 1771 through orders given by Father Junipero Serra, the mission is the least accessible to tourists today because of its distance from a major highway. Fortunately, it has not been ignored, thanks to organizations such as The Friends of Historic San Antonio Mission, that have sought funding and renovation of a place worth preserving. It is one of many missions that 4th graders in California visit as part of their learning experience about California history.

Missions were not easy to build or maintain. Spaniards had to transport people to run the missions, livestock and goods by ship in their attempts to build self-contained city centers for the Spanish government-- Mission San Antonio met its share of unique challenges such as earthquake destruction and deterioration.

Named for St. Anthony who was formerly called St. Anthony of Padua because of his long residence in that city, the Portuguese native was born in 1195. Missions were named for saints, which explains the unique and difficult to pronounce names that are attached to these historic California institutions. Most names have been shortened for easy reference so you'll often hear this mission called Mission San Antonio.

Situated in a picturesque setting, Mission San Antonio is located in the Salinas Valley on lands operated by the U.S. military as part of Fort Hunter Liggett. It takes approx. 40-45 minute by car to reach the mission from I-101, and many tourists simply opt to not make the trek, especially when they can see and access other missions such as Mission San Miguel almost directly off the highway.

Fort Hunter Liggett reservation that surrounds the mission comprises a small portion of the William Randolph Hearst estate. Near the mission is Milpitas Hacienda, a hunting lodge designed by Hearst's favorite architect, Julia Morgan, who was commissioned by the world-renown publisher to build this lodge and the famous Hearst Castle in San Simeon. The lodge operations have changed hands several times but it is possible to stay there and relax, have a wedding, special meetings, etc. Guests are advised that there is limited cell phone service in the area and that a stay provided limited media and telecommunications.

1773 The site of the Mission was moved from the original location to a place farther up Los Robles Valley because of the unstable water source.

1813 the current church was completed

1834 San Antonio becomes government property during secularization. Under civil jurisdiction the mission began to fall into a state of neglect.

1906 quake destroyed portions of the buildings.

1939-40 The United States Army acquires the surrounding area from Randolph Hearst to establish the Hunter-Liggett Military Reservation and train troops for WWII.

1948-52 Reconstruction by the Franciscans completed, and Brothers Training School for the Province of Santa Barbara is launched.

2005 Franciscan Friars turned over the caretaking to the Diocese of Monterey, the owners of the Mission.

2011 The Diocese serves as an active Catholic parish, hosts four annual fundraisers each year, operates a museum in the front section of the quadrangle of the main building, operate retreats, weddings and other special events by reservation.