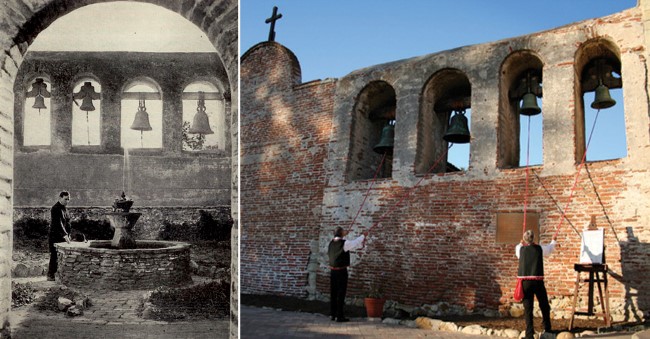 SAN JUAN CAPISTRANO, CALIF.--After the swallows have come home to nest and lay their eggs, and after the big Swallows Day Parade is over, you'd think that things would settle down in the quiet little town of San Juan Capistrano. It's biggest claim to fame is an old mission dating back to 1776. The beloved icon, Mission San Juan Capistrano, has big of fans--lots of plans--and time on its hands. One way the mission has decided to celebrate its humble beginnings is through traditional ceremonies that carry on its history--such as bell ringing.

Bells have played an important part in Mission San Juan Capistrano's history, since Father Junipero Serra first rang them to bless the area in 1776. The daily tolling of the bells allowed people from miles around to keep track of events, including times for work and prayer, and mark important celebrations, such as births, deaths and holidays.

Father Serra established nine of the California missions, including Mission San Juan Capistrano, known as the Jewel of the Missions. Mission San Juan Capistrano is a historic landmark and museum that boasts of quality permanent exhibits featuring original artifacts as well as traveling and temporary exhibits on a wide variety of topics. The site itself serves as a living outdoor museum with original buildings constructed by Native Americans in the 18th century including the Serra Chapel, Great Stone Church, and the original padres' quarters of the South Wing.