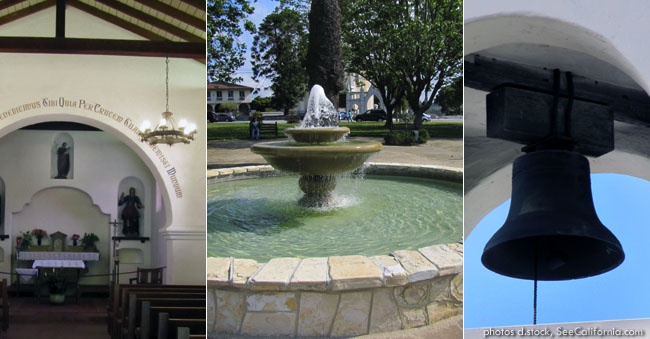 Mission Santa Cruz, part of Santa Cruz Mission State Historic Park, features an unassuming structure, a circular water fountain and park grounds in a largely residential area. It is the second mission built. The first one near the mouth of the San Lorenzo River flooded, forcing Father Lasuen to relocate to higher ground. However, the new mission became known as The Hard Luck Mission when disease swept through the area, killing a portion of the population. Today the only remaining building of the original complex is an adobe which served as housing for native Ohlone families. Another structure on the site of the original Santa Cruz Mission is a half-scale replica of the original church.

The adobe museum with 7 rooms (original adobe had 17 rooms) demonstrates the lifestyle of local natives who came to and stayed at the mission.

Like other California missions such as Mission La Purisima (or Mission La Purisima Concepcion,) Santa Cruz Mission has a formal name: Mision la exaltacion de la Santa Cruz. This longer name is the name of a feast day in the Church calendar which occurs on September 14: The Exaltation of the Holy Cross.

Pirate problem! Among its many struggles, Mission Santa Cruz  was looted in 1818 by an unsavory group, prison convicts from Guadalajara who took up residence at neighboring Branciforte pueblo. They were aware the residents of the mission had fled when they received warning of a possible pirate attack from the well known and infamous Hypolite de Bouchard. Locals sought to avoid encounters with pirates who had no qualms about robbing, killing, burning and destroying all that was of no value to them in their pursuits.

Like so many California missions, the peaceful grounds and scenes today don't fully tell the story of the stormy past in which these religious and residential and commercial centers were established. In addition to floods, disease and pirates, Santa Cruz Mission was home to the first autopsy in California performed on Fr. Andres Quintana in 1812 after it appeared he'd been poisoned.

Built between 1822 and 1824 by local Ohlonean and Yokuts Indians, the park's signature adobe is the only remaining structure from Mission Santa Cruz, founded in 1791. One of just four adobe buildings left in Santa Cruz County—and sometimes confused with the nearby replica mission chapel—it is the only building of its kind preserved as a museum in the State of California.

The adobe operated until 1834 when it was secularized. After decades of private ownership, the adobe was sold to the State of California, extensively restored and finally opened in 1991 to the public as the Santa Cruz Mission State Historic Park. Supported by Friends of Santa Cruz State Parks, a non-profit state park partner dedicated to sustaining the legacy of state parks and beaches,  Friends conduct free educational programs including tours, junior rangers, campfire programs and educational programs for approximately 2,800 school children annually. Friends also operates the Mission Park Store to benefit the park.