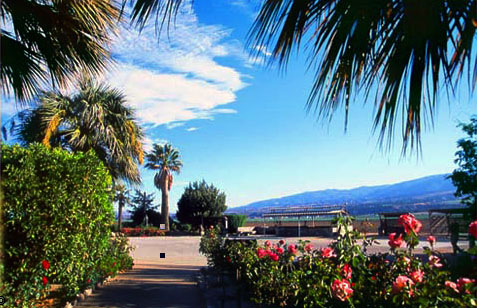 Soledad is located along the Camino Real (Kings Highway) where Spanish, who established the missions in California, created a route from south at San Diego to north of San Francisco.21 missions were built along this road, each approximately a day's walk from the next. Certainly one of the loveliest, rural missions, Soledad Mission is set amongst the beautiful hills and mountain range that separates this fertile Monterey County valley from the Big Sur coast.

Celebrations such as the annual Mission Nuestra Senora de Soledad Grape Stomp Festival and BBQ with Mariachi Bands in October and Soledad Community Parade and Fiesta in June provide opportunities for tourists to enjoy the country charm and colorful heritage of music, dance and food with a flair, uniquely prepared and served to local tastes. Out at the mission and in parks throughout Central California, you'll notice giant, stone barbecue pits that are sometimes 10 feet in length, large enough to fan the flames of an oak fire where beef is cooked and served to an entire ranch, community or town.

The mission is located at 6641 Fort Romie Road. The majority of the approximately 80% Hispanic citizens continue to say prayer in the tradition of the padres and freres who staked claim to the region in the name of Spain over 230 years ago.

While special events last only a day or two and might not be thre when you pass through the region, wine tasting is available nearly every day at several of Soledad's dozen or so wineries that include: Bocage, Chalone Vineyard, Cobblestone Vineyards, Estancia Estates, Hahn Estates, Hess Select, Kendall-Jackson, Mirassou Vineyard, Paraiso Springs Vineyard, Pavona Wines, Robert Mondavi, Smith & Hook and Wente Brothers Winery in Arroyo Seco. See Wine List, Monterey County. Wineries with tasting rooms nearby can be found in cities such as Gonzales, as well.

Soledad is situated in the heart of the 90-mile-long Salinas Valley, nestled between the Santa Lucia mountains with their striking Big Sur coast to the west and the chaparral-covered Gabilan Mountains with famed Pinnacles National Monument to the east. Along the banks of the Salinas River, approximately 25 miles from the Pacific coast, the city is also situated near Highway 101 and is bordered by Salinas and King City. Midway between the Sierra de Salinas and Gabilan Mountain Ranges, communities that include Soledad, make up the south county area of Monterey.

How modern day Soledad began - Two small hotels, a feed lot, post office and a store marked the beginnings of today's Soledad in 1874. In 1886, land was subdivided into lots and sold by its owners, the Munras family. As the town took shape, Southern Pacific Railroad began laying rails and providing service to the area. Vital to the rapid transport of perishable items that had to get to market quickly, Soledad now could expand its economic base, reaching out to the world with its products. Though farming is the primary industry, the California Department of Corrections' Soledad Training Facility has been around for well over 50 years. Located three miles north of the City until 1990, it was annexed and is expanding, with the addition of the Salinas Valley State Prison. This long time neighbor is seen for its positive benefits, providing jobs and services and making Soledad the safest city in Monterey County. It is even safer that the sleepy hollow of Pacific Grove where crime is almost nonexistent, according to the Soledad Mission Chamber of Commerce.

Here are some things to do, places to go and contacts to help you in Soledad, California, the Small Town with a Large Heart:

NO. 233 MISSION NUESTRA SE—ORA DE LA SOLEDAD - This mission, founded October 9,1791 by Father FermŪn Francisco de Lasuén, ministered to the Indians of the Salinas Valley. Governor José JoaquŪn de Arrillaga died here July 24, 1814 and was buried in the chapel. Prosperous in its early years, Soledad declined after 1825, but Father Vicente Francisco SarrŪa stayed on in poverty to serve the Indians until his death in 1835, when the mission was secularized. It was regranted to the Bishop of Monterey in 1859. In ruins after 1874, the chapel was reconstructed and dedicated under the auspices of the Native Daughters of the
Golden West, October 1955.
Location: Fort Romie Rd (Co Rd G-17), 2.5 mi W of Soledad
USGS Quadrangle