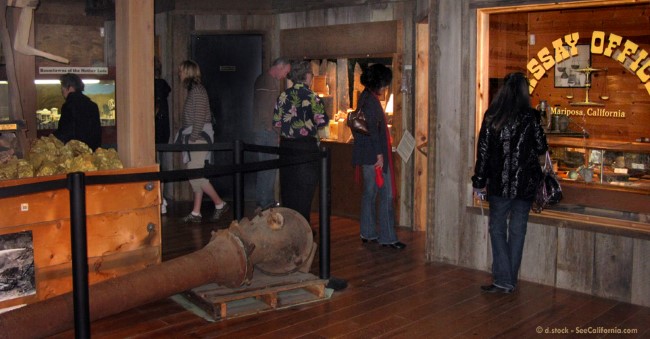 The biggest gold nugget ever found weighed 200 pounds. It was discovered in Australia in 1869. The 2nd largest found in Calaveras County in 1854 weighed 160 lbs.

With several galleries exhibiting the gold rush, actual items used to weigh gold, collect it and refine it, the Gold Country comes to life. Nowhere is it more apparent than one specimen in the museum called the Fricot Nugget.

Smithsonian Institute said California State Mining and Mineral Museum is the best state gem museum in the U.S., and it lives up to its reputation. A huge, sparkling gold rock weighing 13.8 pounds is one of the highlights of the collection. Fricot Nugget, comprised of crystallized gold, is the largest remaining intact mass of crystalline gold from 19th century California.
The precious rock filled with gold was discovered in the American River in 1864 by William Russell Davis. It sat locked up invisible to the world in a safe deposit box in Calaveras, California for over 65 years.

Jules Fricot purchased the nugget from gold miner William Russell Davis over 100 years ago. He was a Grass Valley (Gold Country) resident who found his prized possession so special, he decided to display it in Paris Exposition in 1878. After wow-ing the world with this California gem, he safely stored it in a safe deposit box where it sat even after he passed away.

His daughter, Marie Berton, became the rightful owner of the near 14 pound rock and agreed to donate the priceless Fricot nugget to the museum in honor of her father, Jules Fricot.