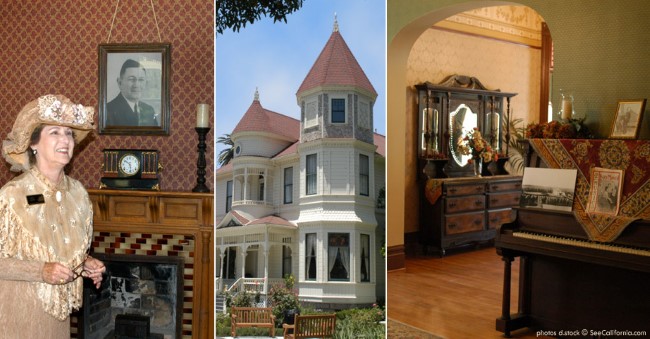 The  4 and 1/2 acre Camarillo Ranch Museum is open to the public, offering tours and special events space for weddings, birthdays, and other functions that you can pay fees to rent. Tucked just out of sight from the busy U.S. Route 101 at the base of the Conejo Grade, it's amazing to drive down a paved, tree-lined road and see the immaculate 1892 Queen Anne Victorian home. Of course you'll want to go inside and see what treasures await!

The 17-room mansion has 6,000 square feet of interior space with  two staircases and beautiful gardens. Built as a family residence for Isabel Camarillo from her loving 28-year old husband, Adolfo, Camarillo Ranch has captured the hearts of guests such as Hollywood celebrities Tom Mix and Rita Hayworth.

Adolfo Camarillo, founder of the City of Camarillo, once managed a 10,000 acre ranch where he developed a breed of horse, the Camarillo White Horse, which is seen in parades today. The prominent figure in local history served as Ventura County Supervisor, as well. He died in 1958.

The City of Camarillo acquired the ranch house and a portion of the original property in 1998 to preserve the legacy of the prominent Mexican-American family.

Created as a 10,000 acre Spanish land grant in 1837, it was sold to Juan Camarillo in 1875. His son Adolfo built the home, later  adding a barn and stables. Today the ranch is owned by the City of Camarillo and operated by the non-profit Camarillo Ranch Foundation.

On tours of the two-story facility you can see interior furnishings, flooring and wallpaper artfully replicating what would have existed previously. While the Camarillo Ranch House is highly sought for special events because of its beauty and well managed operations, one of the most fascinating aspects to this urban gem surrounds the Camarillo White Horses.

With hopes to eventually bring some back to the ranch as fixtures, for now you enjoy the great history of how these creatures came about.

The historic Camarillo white horses started with a "stallion of a dream".

Camarillo White Horses are a rare Spanish breed. From birth they have pure white coats and pink skin. Perhaps, like millions of people, you've watched them march elegantly in the Tournament of Roses - Rose Parade. These show horses always put on a stunning show.

It was the passion of Adolfo Camarillo (October 29, 1864 - December 10, 1958) and a chance encounter at the 1921 California State Fair in Sacramento that led this famed horse's existence. Sultan, "a stallion of a dream," caught the attention of a modestly framed man who's admiration for the white stallion led him to make an offer. He purchased Sultan from Miller and Lux Cattle Company and bred him with Morgan mares.  Sultan and the line he founded have become celebrities over the years, though they actually are a versatile breed serving as the staple for parade mounts as well as ranch work.

Camarillo continued to breed them until his death, and his youngest daughter Carmen continued to the legacy and care of these White Horses. Only 8 horses left in Ventura County when Carmen passed away with Camarillo White Horse Association springing into action to preserve and improve the breed.

Among those credited with their survival is Harold Parker, who  spent his childhood with great aunt Carmen Camarillo Jones on the Camarillo Ranch. Pancho, a 7/8 Quarter Horse was the result of Camarillo Jones' transition from her father's Morgan breeding to Quarter Horses.  Parker's aunt and his mother purchased Pancho from the ranch's dispersal sale, eventually producing Panchito, the last stallion born on Camarillo Ranch around 2006.  Panchito is owned by Parker.

The Camarillo White Horse numbers are limited --  there were 21 in existence in 2017. Parker keeps the horses in several states to help assure their survival. Parker would like to house Camarillo White horses on the small remaining acreage of Camarillo Ranch one day.