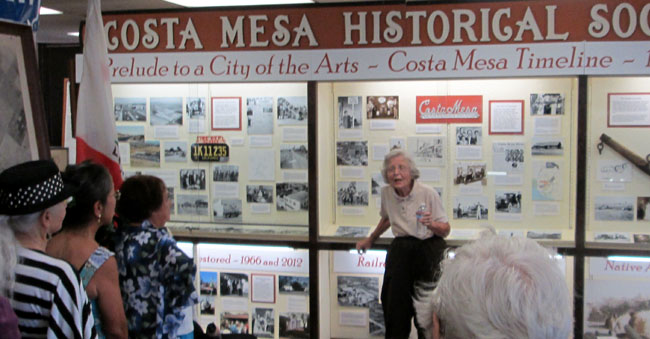 The Costa Mesa Historical Society recently launched the kick-off of a year-long celebration honoring it's 50th Anniversary. There were tours of the impressive museum, talks by society pioneers and a debut performance of "Forever Young," a group of professional entertainers, mostly in their 90s!

Tour Guide Kathy Bequette explained historical exhibits showing wickiups (huts covered with brush wood or grass) that served the Native Americans in the Costa Mesa area. "If they had a flea problem, they would burn down their wickiups and build another," Bequette said. She even showed cogstones that were used by the Indians in warfare as well as food preparation. Nancy Pedersen also gave tours.

Lucky visitors to the event, which drew over 100 history-conscious characters, enjoyed seeing a variety of exhibits on the Santa Ana Air Base (where pilots were trained in World War II); the Segerstrom family (who became the largest lima bean producers in the country and whose property evolved into the famous South Coast Plaza) and the Diego Sepulveda Adobe Estancia (which you can see in its full splendor at 1900 Adams Ave.). "The adobe was Costa Mesa's first motel," quipped Hank Panian, one of the original society members.

Cattle were raised (in what became the Costa Mesa area) and the adobe was built to shelter the herdsman, who tended the critters for Mission San Juan Capistrano. Built sometime between 1817-1823, the adobe later became the property of Don Diego Sepulveda, a former alcalde for the Pueblo of Los Angeles, and then went through a series of owners until the Segerstrom family purchased it in 1940. In 1963, the adobe and its 5-acre-site were donated to the City of Costa Mesa by the Segerstroms. The society maintains the structure and gives tours inside on the first and third Saturdays from 12-4 (or by appointment, 949-631-5918).

During the society's "Flashback" celebration, panel moderator Cindy Humphreys asked society founding members, Hank Panian and Helen Vidal Humphreys about the CMHS heritage. "The city was very cooperative in helping us develop the society," said Helen, who grew up in Huntington Beach. "They'd ask, 'What can we do to help?'" (That brought smiles to the faces of attendees like Costa Mesa Mayor Steve Mensinger, Mayor Pro-Tem Jim Righeimer and City Council member Sandy Genis.) Society Vice President Terry Shaw (whose late father, Bob, was on the society's board) told the exited audience about several special events in the 50th Anniversary Year, including a huge celebration at the adobe in August of 2016. (For further information go to CostaMesaHistory.org or call 949-631-5918).

The society's second vice president, Dana Kurzbard, a former star volleyball player at the University of California, Irvine, did a marvelous job chairing the event, which had many volunteers,including a Golden Anniversary Committee. One of the highlights was the performance of "Forever Young." Some of the group's main stars included a former tap dancer for MGM and "The Little Rascals, " Sid Hallburn, 91 (who danced when he was 3 on stage with legendary Banjo King Eddie Peabody); Fr. Christian Mondor, Ph.D., 90 (a banjoist, who once played with Peabody); Fr. Al George, 85 (who played clarinet for the Air Force and LA Rams bands), and Dr. Thomas Penderghast, Ph.D., 80, a top guitar musician and former Pepperdine professor. ( For further information, email justlisted@yahoo.com and put "Forever Young" on the subject line. )