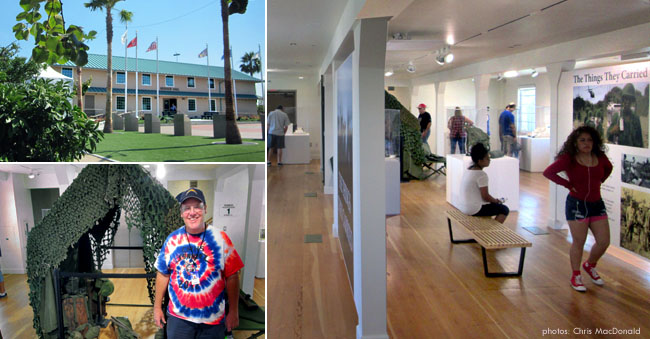 Heroes Hall Veterans Museum—California's first museum on the stories of our veterans on OC Fair & Event Center property, was part of the Santa Ana Army Air Base. Between 1942-46, 150,000 military personnel were processed there, including 85,252 pilots!

Before entering the Hall, you pass through The Medal of Honor Courtyard and Walk of Honor, saluting veterans. The initial exhibit features the things military carried in battles from World War II to current conflicts.

On display was Marine Cpl. Miguel A. Vazquez's "ace of spades," a card (on which he wrote his name, Social Security number, blood type and other info) that he carried in his helmet in case he was wounded in Iraq in 2004. He kept the card as a good luck memento and loaned it to the museum.

Nearby are the boots Sgt. Bruce M. Pilch wore for 13 months from Nov. 1967-68 in the jungles of Vietnam. There's a tent, complete with Army gear. The Hall has wall photos of the unsung airwomen behind the Tuskegee Airmen. Little attention has been paid to the two African-American women pilots, who helped recruit and train the famous airmen unit. You'll see pilots Janet Harmon Bragg and Willa Brown Coffey.

There's a display showing the Navajo Code Talkers, a special group who took part in every assault in the Pacific from 1942-45. In 1942, the first group of Navajo went to boot camp at Camp Pendleton. They were able to send communications that could be decoded faster and in an unbreakable code.

There's a fabulous photo of General Douglas MacArthur, commander in chief of Allied Forces of the Pacific, with members of five American Indian tribes in the special Army unit and photos of baseball great Joe DiMaggio, who served at the Santa Ana Army Air Base.

It's wonderful that this remnant from the old base has been restored to forever pay tribute to military veterans who have ensured our freedom.

"It's a real thrill to work here, getting to meet veterans from World War II and all the conflicts and learn about the sacrifices they and their buddies made," said Hall Receptionist Hope Reish. "I feel honored!"