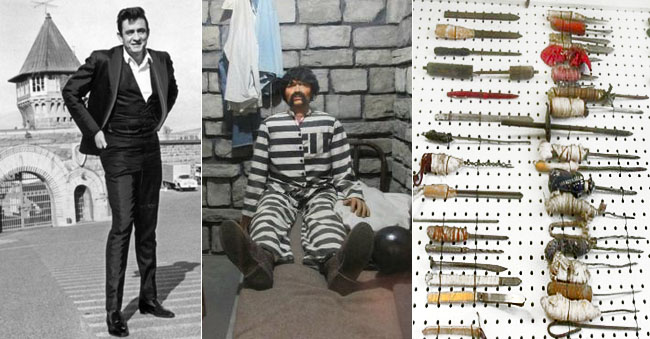 The Big House Prison Museum is located on the grounds of Folsom Prison. The Prison Museum has been located in a 900-square-foot building outside the East Gate since 1987.

Exhibits in the small museum pay homage to musician Johnny Cash who lived from February 26, 1932 to September 12, 2003. Nearly 50 years ago he performed two shows at Folsom State Prison for the release of his album "At Folsom Prison", and 60 years ago he wrote and recorded the hit song, "Folsom Prison Blues" on July 30, 1955.

Operated by the Old Guard Foundation, the Big House Prison Museum has a permanent exhibit of Johnny Cash memorabilia and photographs, as well as collections of unique and fascinating objects pertaining to the Folsom Prison. A collection of shivs (weapons made by inmates in prisons), guns, restraining devices such as a ball and chain and handcuffs, and even a hangman's platform are part of the museum collection.

Folsom Prison opened in 1880 and is the second oldest prison in the California system. Its unique stone edifice looks like a castle of sorts. The history of the prison is fascinating to learn about -- the Prison Museum is chock full of photographs, storyboards and there's even a replica jail cell. Though small, the museum proves that sometimes size doesn't matter. The well-thought out collections such as license plates created by prisoners, both entertain and educate.