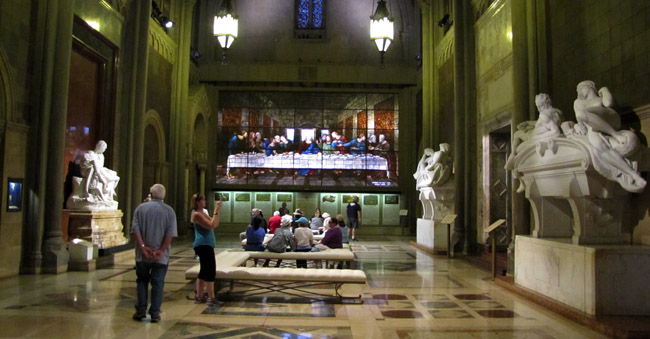 The Forest Lawn Museum which opened in 1952, was described by founder Dr. Hubert Eaton, as a place where artists study and sketch, and where school teachers bring happy children to see the things they read of in books.

While there are nearly a dozen Forest Lawn locations, the original Forest Lawn in Glendale has been a Southern California landmark since 1906. Sometimes referred to as Disneyland for the Dead, Walt Disney would not be placed in a grave there until 1966. He shares good company with many family members and hundreds of film stars, producers, animators and the likes, dating back to the early days of entertainment during the silent film era.

Seeing gravestones, plaques and artwork commemorating famous dead people is but one element of the Forest Lawn experience in Glendale, however. This Los Angeles attraction has a world-renowned art museum and is home to two of the largest religious paintings in the Western hemisphere. When you drive up the hills filled with miles of green, green lawns, the bustle of an LA freeway just disappears and a comfortable feeling or peaceful tranquility takes over.

But we're here to talk about the Forest Lawn Museum, Hall of Crucifixion-Resurrection, The Great Mausoleum and Hall of Liberty. Don't get too comfortable or relax too much (loitering is not allowed,) as you'll want to soak up the some amazing visuals.

The only place in the world where Michelangelo's greatest statuary works can be seen together in one location, permanent exhibits, The Last Supper & The Poet's Windows treat viewers to a stunning stained glass masterpiece. The Last Supper is the centerpiece of the Memorial Court of Honor. Guests can take their time, sitting on benches to immerse themselves in this unforgettable stained glass re-creation of Leonardo da Vinci's famous painting  in the Great Mausoleum.

Concerned that the badly damaged original in Italy would be lost to the world forever, Eaton commissioned Rosa Moretti, who took nearly seven years to transform pieces of glass into a large display, stained glass work of art. Carefully brushing glass with a variety of paints mixed with powders, she then fired the pieces in a kiln. To create such a large piece (30 feet long and 15 feet high) that can hold up its own weight requires engineering skill in addition to artistry of design.

In a corridor on Dahlia Terrace inside the Great Mausoleum in Glendale, each window above the sarcophagi was crafted by Western Decorative Glass in Oakland and installed in 1926.

The Hall of Crucifixion-Resurrection painting was originally brought by Polish artist Jan Styka to the Louisiana Purchase Exposition in St. Louis in 1904. Because of its massive 195 foot long by 45 foot high size, he was unable to display it and was forced to return to Poland without it because he could not pay the duty to take it home. He died in 1925 without ever seeing his painting again. Dr. Eaton located it at the Chicago Civic Opera company in 1943 and unveiled it on Good Friday in 1951 at its new location in California.

The Resurrection was commissioned after a 25-year long and futile search for an epic painting to complete the Trilogy. American artist Robert Clark was finally selected and completed the commissioned work in 1965.

A cool coloring book available for download on Forest Lawn website includes pages to color or paint that include works on display:

Song of the Angels
Administration Building Duck Pool and Fountain
The Finding of Moses Fountain
Statue of Moses
La Pieta
Court of David
Memorial Center of Honor - The Last Supper Window
Little Church of the Flowers
Church of the Recessional
The Christus
St. George
The Christmas Window
Statue of George Washington
The Signing of the Declaration of Independence - Mosaic
Abraham Lincoln
The Hall of the Crucifixion
The Crucifixion Painting
Wee Kirk o' the Heather


Jean Hersholt's grave
Hersholt died of cancer in Hollywood, and is interred in Forest Lawn Memorial Park Cemetery in Glendale. His grave is marked with a statue of Klods-Hans, a Hans Christian Andersen character who left home to find his way in the world - much as Hersholt himself had done.