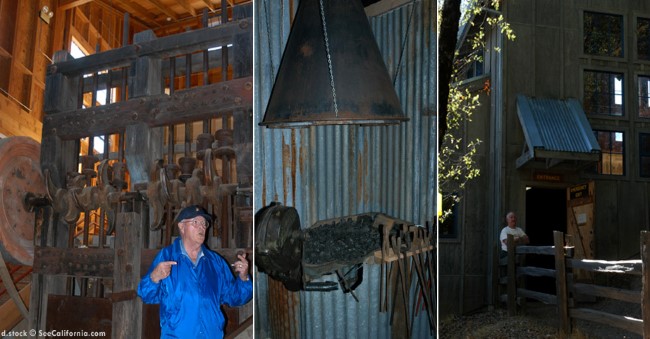 Residents remember that the thunderous crashing staccato of the ore stamp mill could be heard for miles in the narrow canyon. The song of the stamps had been a familiar sound in this area since George Cozens erected the first mill here in the 1890s for the Silver Pine Mine.

Operated as the Schiff Mill through the 1920's, it was completely rebuilt by Horace P. Moulton in the mid-1930's and opened up for local and regional use. Stamp mills were located near mines so that the ore could be easily transported and crushed into powder, which was then washed or combined with mercury to extract the gold. Consignments from a few tons to hundreds of tons were usually processed here.

Gold Bug Park's 61 acres of park include six mining claims once known as Poverty Ridge Mining District, some of the richest deposits in the Mother Lode. 1848 the gold was flowing but by 1852 all but the heartiest miners disappeared. In the late 1800s hardrock mining began in the nearby hillsides, continuing until WWII. Gold Bug Park is significant because it is a perfect example of a typical neighborhood mining area. A small hardrock mine, a working ore stamp mill, hundreds of prospecting holes, and evidence of a water supply ditches are all within the park boundaries.

GOLD BUG MINE– Gold Bug Mine was a typical hard rock mine. Small mining companies and miners were digging their own drifts following the veins into the sides of the hills. John Dench and William Craddock established Gold Bug Park & Mine as the Hattie in 1888. The mill, with eight stamps weighing a reported 2,500 pounds each, could be heard on Main Street when they were crushing ore.