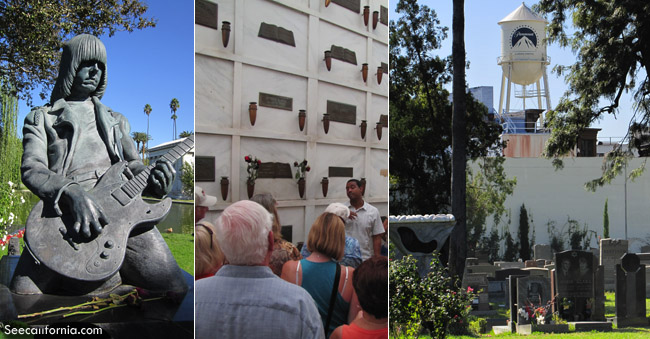 Hollywood Forever is one of LA's top, must see attractions. While the word "museum" is not officially part of its name, a visit to this free admission cemetery and events venue has most convinced that there's no finer place to get a grip on life than a visit to this fascinating destination. Yes, cemeteries are destinations in Los Angeles — you better believe it!

Fans of film and acting will find statues and memorials to luminaries buried there such as Judy Garland, Cecil B. DeMille, Rudolph Valentino, Mickey Rooney, Tyrone Power, Douglas Fairbanks, Johnny and Dee Dee Ramone, Valerie Harper, Chris Cornell, and hundreds of others.

Even Toto, the cute little Cairn Terrier from the Wizard of Oz is immortalized with a headstone that includes a statue of Dorothy's beloved dog. Terry (AKA Toto) pulled down $125 per week during filming of the famous black & white movie, more than many of the human actors in the film!

Founded in 1899, the cemetery is one of the world's most visited landmarks, and the final resting place of hundreds of Hollywood legends. Not everyone selecting Forever Hollywood as their final resting place is well known in acting circles. Theodore von Karman, for instance, c0-founder of NASA Jet Propulsion Laboratory, is among them. He was recognized as The Father of Modern Aerospace Science.

One of the funnier lines on a headstone comes from well known Bugs Bunny cartoon voice, also known as "Man of 1,000 Voices", Mel Blanc. You can almost guess what he wanted people to remember him for after he passed away in 1989. "That's All Folks."

The functioning cemetery and mortuary offers lawn spaces, cremation services, cremation niches, mausoleum crypts and memorial services, and the Beth Olam section is one of the oldest, active Jewish cemeteries in California.

As Los Angeles' most dynamic cultural event center, Hollywood Forever welcomes families and visitors to concerts, films, and events each year. Since 2000, Hollywood Forever has partnered with Cinespia to present cinema screenings in the summer on the Fairbanks Lawn, and the cemetery's Dia de Los Muertos celebration is the largest outside of Mexico, attracting visitors from all over the world.

Paramount Studios was built on the undeveloped south end of the original site, where the studio still operates, and the cemetery was listed on the National Register of Historic Sites in 1999.