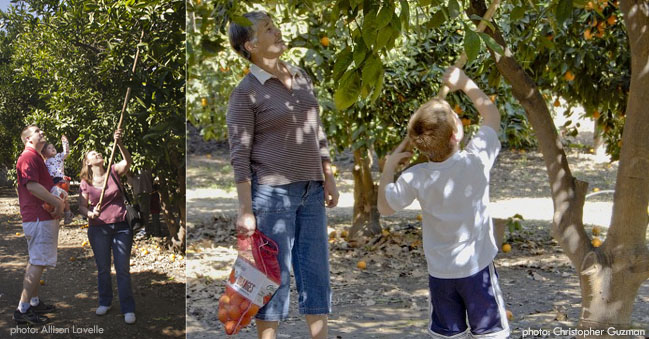 Heritage Park in La Verne contains an historic orange grove where seasonally you can still pick your own fruit for a small fee. Operated by Heritage Foundation, the park's Weber House, a 100+ year old home which was relocated in 1984 from Emerald Street to the public park on Via De Mansion, sits on a one and a half acre ranch. The Weber House is one of the oldest houses in La Verne, dating back to the 1880s. Along side it is a turn-of-the-century barn on land once owned by estate executor John Weber.

The purpose of the house and the preserved grove of approx. 150 trees, offer visitors a glimpse into life during the early 1900s. At the foot of the San Gabriel Mountains and fronted by citrus trees is a unique replication of La Verne's agricultural past.

Oranges, grapefruit and lemons were king, influencing all of life in La Verne before the turn of the 20th century. The city motto was "Heart of the Orange Empire," and La Verne's agriculture base provided jobs in growing, picking, packing and shipping. An influx of Chinese, Indians, Japanese, Filipinos and Mexican immigrants helped witness the biggest orange crop in history in 1923. A combination of the Depression, WWII, post-war housing demand and a mysterious crop disease all contributed to the demise of the once thriving industry.

The last of the city's old orange groves, the historic park is scattered with old rusted smudge pots and other remnants of a time when orange groves covered the area.