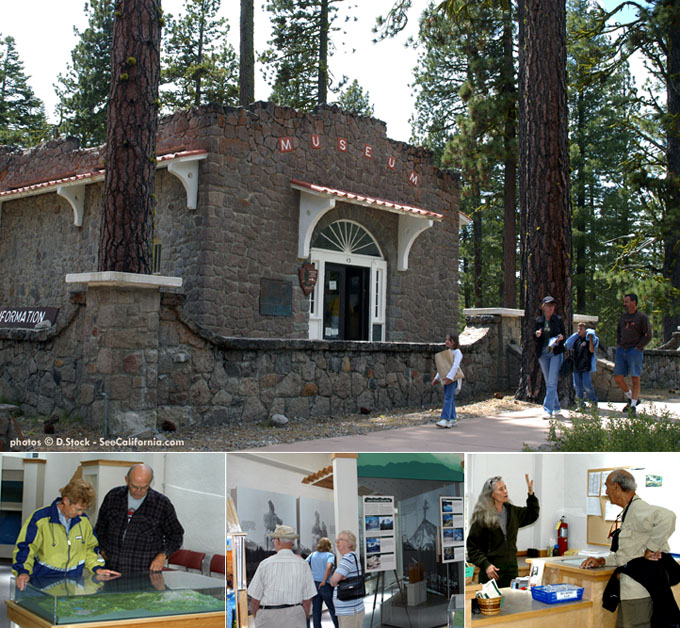 Lassen Volcanic National Park, home to all four types of volcanoes in the world, features an amazing and unique history you can read about and see through exhibits inside the park's Loomis Museum.

The beautiful stone building offers an inviting appearance and is free admission. Learn about the park's history--even before it was a national park!  Native Americans frequented Lassen during the summer mostly. The meeting point for at least four American Indian groups that included Atsugewi, Yana, Yahi and Maidu shows evidence of hunting and gathering. Stone points, knives, and metals are the few artifacts uncovered and on display at Loomis Museum.

Learn about Lassen's four types of volcanoes at the museum, then go see them. Lassen Volcanic became a national park in 1916 because of its significance as an active volcanic landscape.

The museum has interactive displays and also includes a gift shop and visitor center where park rangers & staff can answer questions. While Loomis Museum is open only during summer months, there is a visitor center, Kohm Yah-mah-nee Visitor Center, open throughout the year. Some roads may be closed in the winter due to snow but the park is open year-round, and the admission rates go down significantly in the winter.

Outside the museum is a shaded area with picnic tables where you can sit and enjoy the views and natural surroundings. Another thing we found of interest was the Seismograph building just outside the museum. It was built in 1929 and still is in use today to measure the movement of the earth from earthquakes. You can look inside a window and see the seismography.