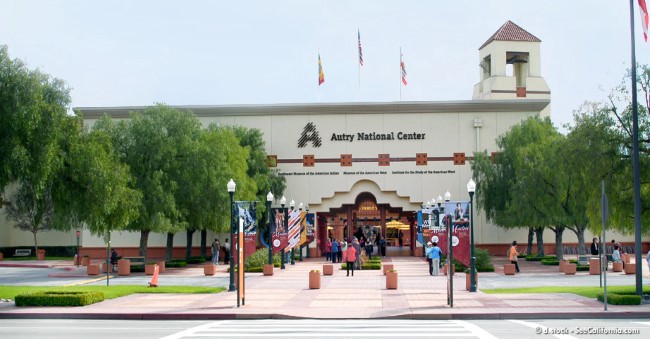 Los Angeles, Calif.--The Autry National Center is devoted to the history and mythology of the American West. While its focus has always included the American West, many have associated the the museum primarily with the life of famed Western Cowboy entertainer, producer, and singer, Gene Autry. The star had some very big boots to fill for others who followed in his footsteps, and few have not one but several museums named after them. While the Gene Autry Oklahoma Museum offers a tribute to the man, the Autry National Center memorializes the history of a people Autry often portrayed and sang about.

The museum opened in 1988 and in three years received accreditation from the prestigious American Association of Museums. Built with an initial $54-million gift from the Autry Foundation, the non-profit museum displays some of its more than 45,000 pieces of art and artifacts. Priceless paintings in the collection displayed in the museum include Remington, Bierstadt, Wyeth and Moran.

Native American Indian art, antiques, authentic chaps, spurs and saddles, armor of Spanish conquistadors and costumes and posters from America's most beloved Western films are few of the items you may enjoy during a visit. The Colt Firearms Collection of significant and historical firearms is the nation's finest and also probably the best of its kind, anywhere.

Since the 1950's, Gene Autry envisioned a museum to house his artifacts and fine art relating to the American West. He said it was his love of the rugged land stretching from the Plains and Rocky Mountains to the Pacific, and the people who built communities on it, that inspired him. He wanted the rich and varied history of those who settled and documented the West, and those who made their lives there to be forever remembered. He felt it was important to establish a museum to permanently display his memorabilia, and his dream was fulfilled with the Autry National Center.

Who was Gene Autry?

Orvon Gene Autry was born September 29, 1907 on a farm near Tioga, Texas. He came from humble beginnings, but his energy, talent and ambition never let that get in the way of his becoming a legend. His entertainment career lasted over 60 years and during that illustrious career he gained five stars on the Hollywood Walk of Fame, appeared in approx. 100 movies, spoke on CBS Radio for 16 years, sang for 600 records that sold millions (seven gold and two platinum), and appeared as the star in nearly a hundred television shows.

Gene Autry owned a recording company, a rodeo and the Anaheim Angels baseball team. He was known and remembered as a Singing Cowboy with an honest approach to life in the Old West, and a smile as he road along the trail. He died in Studio City, California on October 2, 1998 at the age of 91.

"It has always been my intention to build a museum which would exhibit and interpret the heritage of the West, and show how it influenced America and the world," said Autry. His legacy will always be remembered with the establishment of a world class museum appealing to all ages, and attracting international travelers seeking to connect with the American West immortalized in Autry productions.