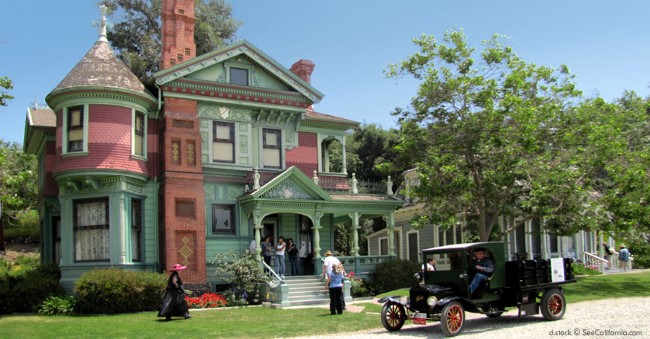 The eight historic structures located at the museum, constructed during the Victorian Era, were saved from demolition and serve as a perfect background to educate the public about the everyday lives of Southern Californians from the close of the 19th Century into the early decades of the 20th Century.

Built in 1887 by George W. Morgan, real estate developer, at the foot of Mount Washington just a few blocks from the museum in Highland Park. From the time of its construction, the house was sold many times and was moved from 4501 to 4425 North Pasadena Avenue (now Figueroa Street) before being purchased by James G. Hale in 1906.

The building is an example of Queen Anne and Eastlake styles. The exterior colors of Hale House were reproduced from chips of the original colors found on the house during restoration. The interior has been restored to represent the rooms as they may have appeared in 1899.

The choice of this Second Empire with a French Mansard styled roof for this working-middle class home was rather unusual for the West coast.

Built by the Beaudry Brothers in 1887 as part of a large tract of  middle-class homes in downtown Los Angeles original owner, John J. Ford, was a wood carver known for carvings in the California State Capital and the Iolani Palace in Hawaii.

Built on the grounds of Huntington Memorial Hospital for Dr. Osborne, in 1899, the Queen Anne styled Cottage with Gothic influences moved to the Heritage Square Museum in 1981.

By 1887, a new train depot stood overlooking a newly laid out grid of streets from the new subdivision called the Palms. This town was the only sign of urbanization between Los Angeles and the sea. The Palms Depot was declared a historical monument in 1963 but was condemned in 1975. S.O.S. (Save Our Station), moved the depot to the museum, thus saving it from demolition.

Designed in the Carpenter Gothic and Queen Anne styles, the church was built in 1897. Initially surrounded by orange groves by 1979 the church was in disrepair By 1981, the church was cut into six pieces and moved to the museum from its original site on the southeast corner of Orange Grove Boulevard and Lincoln Avenue in Pasadena. Efforts to replicate the original stained glass window designs are underway.

The largest house at the museum designed by architect E. F. Kysor and built in 1876 by lumber baron William Hayes Perry in the Classic Greek Revival Italianate reflected the social prominence of then-fashionable  Boyle Heights. The most expensive residence yet seen in Los Angeles. was threatened with demotion by 1975. Moved to the museum for restoration it was donated to Heritage Square Museum. Since then, the museum has continued to restore this important structure. The William Hayes Perry Residence is listed in the National Register of Historic Places and is the City of Los Angeles Historic-Cultural Monument No. 98.

Gilbert Longfellow's eight-sided home  is one of less than 500 octagon structures left in the United States and is one of the remaining, unaltered examples of this style in Southern California . Over the years the house fell into disrepair. In 1973, facing demolition of the house where he had spent much of his life, Walter Hastings (Longfellow's grandson) sought assistance from the museum to save his family's home. In exchange, he donated the house to the museum.