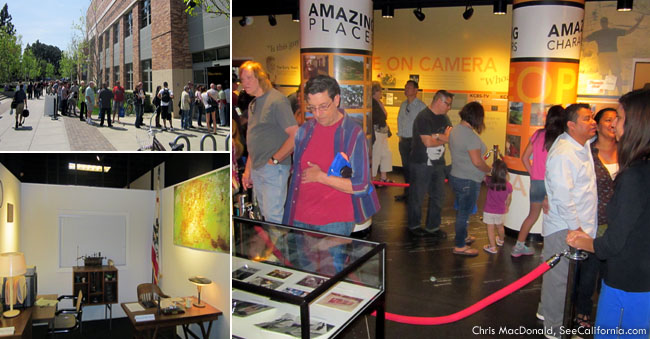 Photos include a replica of Huell Howser's office (bottom left; approx. 2,000 visitors stood in line for the first day of the Huell Howser exhibit outside the Leatherby Libraries at Chapman University (top left); and people of all ages were amazed by the photos, memorabilia and even videos you can watch.

The award-winning journalist, who donated his TV shows, books, personal letters and art, as well as two houses and more to Chapman, would be thrilled with this special exhibit, which was created after his death in 2013.

"We wanted to honor his memory and show his work behind the scenes," said Chapman's Chief Archivist Rand Boyd. The magnificent result is an exhibit, sponsored by the Automobile Club of Southern California, showing his office, a production schedule, sound-graph of him saying, "California's Gold," a milk bottle with his likeness, "found art" from his journeys (which include beautiful pieces of metal), part of the original HOLLYWOOD sign, his famous yellow Hawaiian shirt, pillars with photos and info on his journeys, a map of California on the floor showing where every segment was shot, and quotes from his friends on the wall: "He could take a complicated subject and make it simple," said Ryan Morris, Huell's assistant and producer. "He was not an intellectual but an artist and television was his tool." Along the wall, there's a fascinating timeline of his life, complete with pictures and notes. There's also a reading room, complete with hundreds of his books on California history, a viewing area to watch his shows, and a large archive, which stores more than 1,000 TV segments.

At a recent open house of the exhibit, "That's Amazing! Thirty Years of Huell Houser and California's Gold," thousands of people lined up to take their turn walking amongst their friend's (everyone who religiously watched his segments thought of him as a friend) memorabilia. Ironically, as fans waited in line, they could hear the actual operatic whistling of Carole Anne Kaufman, who once wowed Huell with her incredible talent that has made her known as "The Whistling Diva." Carole and other stars from his shows, came to honor Huell and his fans. They also came to see the screening of a world premiere hour-long movie about Huell and the making of "California's Gold," created by Chapman Film Professor Jeff Swimmer. The movie's called, "A Golden State of Mind—The Storytelling Genius of Huell Howser."

Huell, a smiling, southern drawl-talking, down-to-earth fellow from Tennessee, believed every person in every walk of life has a story to tell. And he always brought out the best in his interviewees by putting them at ease and becoming their pal. Toward the end of his life, Huell and Chapman President James Doti became good friends, and he wanted to find a university that would digitalize all the episodes of his shows and make them available free of charge to the public, which Chapman has done. Check out, huellhowserarchives.com.

He also wanted to endow a "California's Gold Scholarship" that would be presented to Chapman undergrads who "display a positive outlook and are actively pursuing ways to improve society." He funded this during his lifetime and as a bequest through his living trust.

"A hundred years from now…the words ‘California's Gold' will no longer mean anything about me or a television series," Howser said. "They will mean what California's Gold has always truly meant: not the literal gold nuggets that they pulled out of the earth…but the dreams that brought people here and are still bringing people here." In October, 2012, Huell was filmed talking about this bequest. You can watch it online at chapman.edu/legacy-stories.

We need Huell's positive outlook on people and places more than ever before. Thanks to his extraordinary vision and generosity, Public Television, Chapman University, the Automobile Club of Southern California and others, we can escape and go on vacation with Huell whenever we want to, learning the hidden treasures in our "Golden State." The forever contributions that Huell has made will enrich us all with real "California's Gold."

The exhibit is currently open from 9-5, Tuesday through Friday and from 10-6 Saturdays inside the Leatherby Libraries, Chapman University, One University Drive, Orange. To find out more about the exhibit and further information, go to chapman.edu.