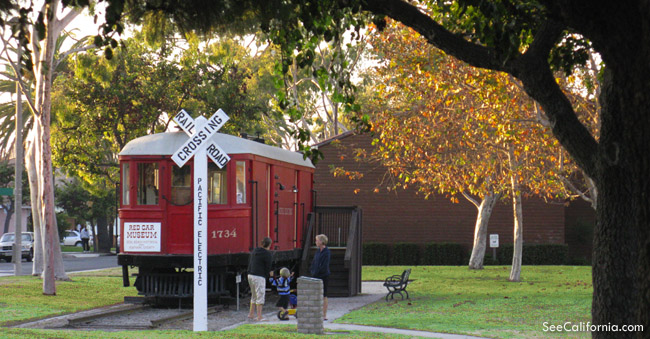 Laura Alioto "Seal Beach had the buzz. You rode the Red Car and went there for fun in the sun."

Books have been written about the famed California Red Car, and several museums and history groups have restored antique Red Cars for the public to ride on or see. One such museum has existed in Seal Beach, Calif. for several decades. Inside an authentic Pacific Electric Right of Way, Car No. 1734 is a rare Pacific Electric tower car built in 1925.

The Red Car Museum on the greenbelt next to the Mary Wilson Library Branch has been a highly visible part of Seal Beach since the 1970s, when the late Virginia Hadley helped rescue a Pacific Electric tower repair car slated (like so many others,) to become a reef in the Pacific Ocean.

According to daughter Karen Hadley, "My parents and I came to Seal Beach in 1953. In the 1970s my mother, Virginia Hadley, Barbara Roundtree and Edie Hall saved an old Pacific Electric Railway tower car from being demolished. Barbara had the railroad tracks brought in and the car transported to where it stands today on the Greenbelt near Main Street in Seal Beach. These determined ladies got busy, raised funds and participated in the restoration of this antique to its former glory days. They formed the Seal Beach Historical Society and eventually opened the doors in the Red Car Museum.  My mother loved Seal Beach and was so proud to help save the Red Car. She considered it her greatest accomplishment in life."

Red Car Museum was once a roving machine shop sent out to troubleshoot problems along the 40-mile Pacific Electric LA-Newport Line.  A center tower was used for repairs and maintenance on the overhead lines. It operated for almost 50 years between 1904 and 1950. 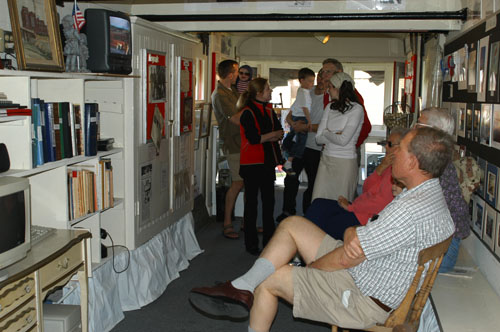 Some of the interesting donated items included signs, tickets, pins, pictures and other items once appearing inside the car museum included:

According to news accounts, the Seal Beach Historical Society was unable to meet city obligations to maintain the Red Car facility to city standards and was formally offered $10,000 on Dec. 22, 2020 to relinquish ownership and remove "Red Car Museum" from its name.

Approximately two months later in February 2021 the Seal Beach Historical Society emptied the Red Car Museum of its photos, memorabilia and collections and sold the repurposed car to Seal Beach Lions Club & Foundation for $1501.  The Red Car Museum is closed as of this posting in March 2021. But new coats of paint and repairs are returning the Red Car to its former glory on the lawn where it's visible to incoming traffic from Pacific Coast Highway next to the intersection of Main Street and Electric Avenue in downtown.

Other Red Cars you can see: Head for the Southern California Railway Museum where you may be treated to a ride in a Red Car and you can see a small but interesting collection of items such as rail tickets. socalrailway.org