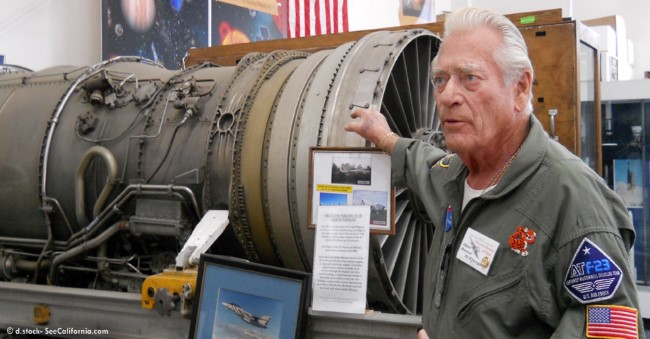 Learn About "The Goose" & The Wild Blue Yonder at the The Western Museum of Flight By C. MacDonald TORRANCE AIRPORT, TORRANCE, CA--On Nov. 2, 1947, Hy Joseph (in photo above) was sitting on a hillside and happened to witness Howard Hughes make the one and only flight of the Hercules, the largest flying boat ever built. Its wingspan alone was 320 feet, 11 inches--the biggest in aviation history. "It was really something to see--flying above the water near Long Beach," Joseph still recalled with excitement. The 400,000-pound plane, dubbed "The Spruce Goose" by the media, flew for one mile, remaining 70 feet above the water.

Although "The Goose" is gone from Long Beach (to the Evergreen Aviation Museum in McMinnville, Ore.), more than the memories remain about it at the Western Museum of Flight, which has some of its actual engines, according to Joseph. "You can see it, the World's largest radial engine, made by Pratt and Whitney," said the museum's Chief Docent, a Naval Air veteran, who served in Korea. There's so much more to see there, including fantastic exhibits on Space Exploration (from satellites to moon landings); Radio-Controlled Aircraft (which started as a hobby and ended up being used for military surveillance, target practice and even firing weapons & dropping bombs); Classic and Unique Aircraft (i.e., YF-23, F-86, F-5, F-14, YF-17, JB-1, Flying Wings, Target Drones, Test Aircraft, Gliders and more; you can even climb in one of the cockpits); Uniforms and Equipment from airlines and military (that were used in commercial aircraft, aerial reconnaissance and combat missions), and the Dr. Ira E. Chart Library (includes thousands of books and manuals).< The wonderful facility, staffed with friendly and knowledgeable people, also hosts The Kids Love Aviation Science (KLAS) program that inspires hundreds of students to stay in school and be serious about their studies so they can achieve their dreams. There's also an incredible Celebrity Lecture Series, where you'll hear from icons in aviation. The Southern California Historical Aviation Foundation's Western Museum of Flight is raising funds for a major expansion at the east end of Torrance Airport. It will include a Restoration Facility, where the public can see aircraft being restored. The fabulous Western Museum of Flight is open Wednesday through Sunday at 3315 Airport Drive, Torrance. Check it out at wmof.com or call 310-326-9544.

Among its programs are monthly lectures that include prominent figures in aviation.