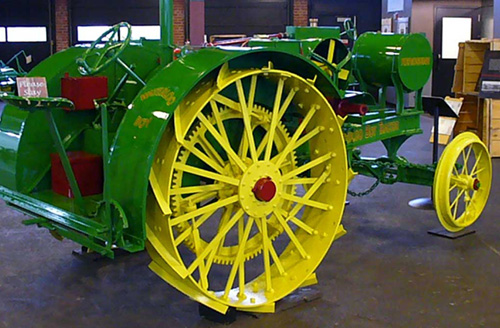 When visiting, Woodland, California, be sure to see Heidrick Ag History Center. It includes the world's largest and most unique collection of one-of-a-kind antique agricultural equipment. Combined with Hays Antique Truck Museum, also recognized as the largest of its kind in the world, the two facilities introduce visitors to the marvels of agriculture, and commercial trucking. 130,000 square feet of interactive exhibits require a little extra time to see and experience. The facility opened in 1997 and specializes in collections of farm implements, tractors and harvesting machinery from the late 1800s through the middle of the last century.

Among the massive collection are some rare farm equipment pieces dating over 100 years! Among our favorites are simple items such as the Fond-Du-Lac 1917. It is a tractor attachment that was mounted on a 1916 Model T Truck. It was one of the many attempts to make Ford autos double as tractors during the WW1 era. What a noble effort. The attachment price around the time was about $150.

Ahead of its time was the Twin City, dating to 1918. The first use of four valves in each cylinder for tractors can be seen in this machine. Some autos have now returned to this system. This Twin City model was continued until 1929, when Minneapolis Co. merged with Moline Plow Co. and Minneapolis Threshing Machine Co. to form Minneapolis Moline Power Implement Co.

An even bigger collection of Caterpillar tractors and machinery provide hours of gazing, reading, and learning. While farm professionals love the museum, kids and people of all ages are amazed by the sizes and shapes of the equipment that has been used. Many inventions were later applied to car-making after proving their success.

Other Caterpillars include a merger of Holt and Best, a diesel economy model, a Caterpillar 20 offered in gray or yellow, a wide-track Caterpillar 25 for hills and swamp land, an R-5 Dozer used primarily for road work, a gap filler used by the military and a D-5 made for the US Army never sold new to the public.

Admission to the museum is affordable and provides a great value considering the quality of the collection and its massive size.