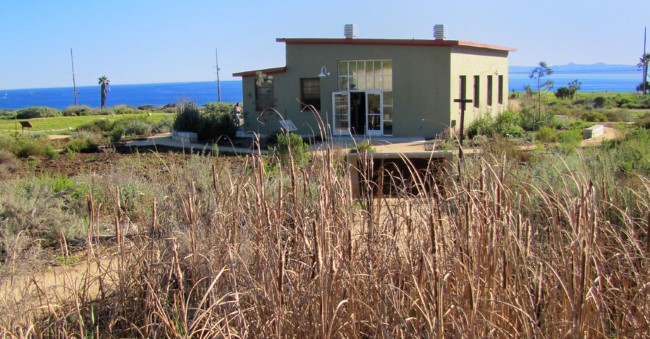 The land, also a former military and Nike missile site, is owned by the City of Los Angeles and managed by the Palos Verdes Peninsula Land Conservancy, whose volunteers and naturalists have planted native scrub and grasses, installed public trails, developed a fine Nature Education Center and created wonderful words and photo signage about the habitat and Tongva (which means "people of the earth"). 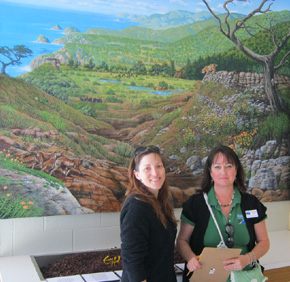 Jessy Melowicz (left) and Roxanne Roberts, naturalists at White Point Nature Preserve stand in front of a mural inside the center

You'll learn about and see the actual plants that treated ailments from headaches to infections at the Tongva Garden of the West. Mugwort eased pain; Mule Fat served as an eye wash; Buckwheat leaves treated headaches and stomach aches, and the seeds from the California Poppy treated toothaches and open sores. Naturalists say that nearly one-forth of our modern medicines are derived from plants used by native peoples for thousands of years.

At the Garden of the North, you'll see the Elderberry ("tree of music") that can be made into flutes and whistles; Cattails used for decoration on the face, chest and back, and Purple Sage burned for sweet-smelling smoke.

Visiting the Garden of the East will show you how the Native Americans got fruit from Cactus; grain from Acorns, and Lemonadeberry, which made a delicious and refreshing drink.

The Garden of the South features California Milkweed, used to make nets; Horsetail Branches that can be turned into sandpaper for polishing wood, and Stinging Nettle, important in basket-making. Baskets also were traded for much needed supplies with others.

The Tongvans used the area as a seasonal camp and were excellent fishermen, who got abalone and fished from both plank boats and reed rafts.

They have been around the Palos Verdes Peninsula for a long time, even reportedly rowing out in their plank canoes to meet Cabrillo in 1542 (near what is now San Pedro).

Roxanne Roberts, a naturalist at the preserve, said the peninsula later was part of the first land grant in California to Juan Jose Dominguez in 1784. Roman Sepulveda obtained the rancho parcel that became White Point.

The origin of the name "White Point" varies by legend. Roberts said it may have come from an English sailor (named "White") who lived there in the early 19th Century; from the white quartz on the cliff sides or from something else.

The area has had a fascinating history. In 1897, Japanese fishermen began harvesting abalone. In 1917, Royal Palms Resort and Spa took advantage of the hydrothermal springs in the cove. The posh hotel had a bathhouse, saltwater swimming pools and even slot machines.

In 1941, the US Military took over White Point for coastal defense. Two 16- inch gun placements, capable of firing 2,700 pound shells with a range of 28 miles, were built. You can still see the massive bunkers today.

In 1954, when the Cold War heated up, a Nike Missile facility was constructed here. You can walk right on top of the launching pad site. It was deactivated 20 years later. The Air Force deeded the land to the City of Los Angeles in the 1970s. In 2000, an agreement was reached by the city and conservancy for the habitat restoration and site management. In 2010, the White Point Nature Education Center was completed.

Jessy Melowicz, a naturalist at the Education Center, which was converted from a missile assembly building, says the preserve is a place for exercise (hiking trails--one 1.1 miles of easy walking; another 1.2 miles of moderate walking), learning (there are exhibits on Harvests & Heritage, The Dominguez Legacy and more), bird watching (California gnatcatcher, Bushtit, House finch, White-capped sparrow, Spotted towhee, Red-tailed Hawk and others) and relaxing (leave the stress of urban life behind). Some folks mediate there. Others gaze from the hills at the beautiful Pacific Ocean and Catalina Island .

Preserve hours are daily from dawn to dusk. The center is open from 10am to 4pm Wednesday, Saturday and Sunday. For more information, contact the conservancy at 310-541-7613, info@pvplc.org or visit their website, www.pvplc.org.

When visiting Huntington Beach or if living there, be sure to drop by the Interpretive Center.