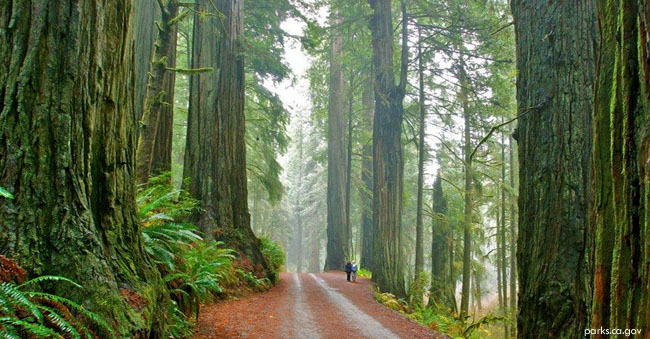 Coast redwood trees
350' or more in height
Base diameter of 20' approx.
Broad and shallow roots up to six feet underground.
Up to 2,000 years old
Insect, fire and rot resistant

Among the tallest trees on the planet you will find the forests of Jedediah Smith Redwoods an unforgettable journey that compels many visitors to return again and again. There's a reason that north coast Californians are a bit mum about their protected and beloved lifestyle. They truly cherish their environs that include these irreplaceable forests, part of the California redwoods within the California State Parks and National Park Service jurisdictions.

This particular forest containing 10,000 acres of first-growth, primeval trees was named for an explorer whose memory seems somewhat distant to contemporary travelers. It is one of the treasured and last remaining coast redwood forests appearing in a narrow strip along the Pacific coastline from central California into southern Oregon.

Seasonally visitors are treated to an undergrowth of rhododendrons and azaleas, mixed with banks of ferns, a subtle, yet impressive display in the softened light of the woods.

Coast redwoods are hardy survivors but recent reports have suggested that major climate changes could impact their ability to thrive and grow. What the coast redwoods in the Jedediah Smith park need most is rain, fog and temperatures and moderate year-round temperatures that have helped them along for some 2,000 years.

Among the redwoods visitors to the park enjoy nature scouting. Keep your eyes and cameras ready to capture images of deer, squirrels, otter raccoons, bears and mountain lions. While some have claimed to encounter Big Foot, there is disagreement over the existence of what's described as half man/ half ape.

Birding in the park is a must. Keep your ears and eyes alert for the sounds and sights of Steller jays, American dippers, woodpeckers, osprey, spotted owls and more.

Camping includes 89 sites providing separate tables, fire rings and cupboards, and all campsites share restrooms nearby. Some sites can accommodate trailers or motorhomes up to 36' (no hookups). Reservations are recommended between Memorial Day and Labor Day. For reservations, call (800) 444- 7275. parks.ca.gov

Dogs must be on a leash no more than six feet long and must be confined to a tent or vehicle at night. Except for service animals, pets are not allowed on trails.

History: Before European contact, the lives of the Tolowa people, along with their neighbors the Yurok, Hupa, Karuk and Chilula, were secure and well-ordered. New settlers depleted natural resources, causing radical environmental changes and cultural conflict. European diseases to which the Tolowa had no immunity decreased their numbers, and many were sent to the reservation at what is now the Smith River. Part of the site of Camp Lincoln, built in 1862 as a buffer between the native people and the settlers, is located in the park. Tolowa descendants are still present in northern California, and many continue to practice their traditions. WHO WAS JEdEdIAH SmITH? Jedediah Strong Smith was the first non- native known to have traveled overland from the Mississippi River, across the Sierra Nevada to the Pacific coast. In 1821, at age 22, he came west and joined the fur-trapping party of General William Ashley. By late 1826, Smith and two partners had bought out General Ashley. Smith led his trappers across southern Utah, Nevada, Arizona, the Mojave Desert and Cajon Pass to Mission San Gabriel, where they rested for two months. When Mexican Governor José María Echeandía ordered them to leave, Smith headed north into the San Joaquin Valley. In May 1827 Smith went to Utah to recruit more trappers, but as they re-crossed the Colorado River, the formerly friendly Mojave Indians attacked, killing ten men. When Smith and his surviving men reached Mission San José, Smith was arrested and sent to Governor Echeandía in Monterey. Again ordered out of the province, the party went north through the redwoods, reaching what is now called the Smith River in June 1828. Two years later Smith and his partners sold their business and returned to St. Louis. But in 1831, Smith felt the lure of the Santa Fe Trail. While seeking water during his last wagon train west, he was killed in a Comanche ambush along the Cimarron River. Jedediah Smith's wish was to be the first to view a country on which the eyes of a white man had never gazed and to follow the course of rivers that run through a new land.” His reports on the geology and geography of the western territories appeared in newspapers of the day, and proved that the Sierra Nevada could be safely crossed to reach California. In a remarkably few years, his travels, observations and notes filled in many blank spaces on the country's map.