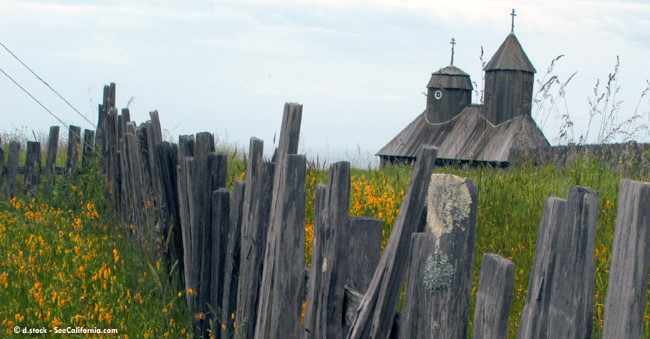 Jenner, California --Fort Ross - The park, one of the first state parks in the California State Park system, was known as Settlement Ross when it was established by the Russian American Company, a commercial hunting and trading venture chartered by the tsarist government. Today it contains building structures, wedding permits overlooking the beach, park space, hiking trails, the beach, and a unique history showcased in the Visitor center.

Fort Ross was once a Russian-American Company settlement operating from around 1812 to 1841. Chartered by the Russian tsarist government, it controlled and maintained all Russian exploration, trade and settlement in the North Pacific. From this location, permanent settlements in Alaska and California were officially recorded.

As the southernmost settlement in the Russian colonization of the North America, Fort Ross created an agricultural base to supply Alaska for the Russians and their vast lands.

For 30 years or more Fort Ross functioned as a multi-cultural settlement to Russians, Native Alaskans, Californians, and Creoles of mixed Russian descent.

Rotchev House - an existing building renovated about 1836 for Alexander Rotchev, the last manager of Ross is the only surviving structure.

Getting there:
Drive 12 miles north of Jenner on Highway One.

The parking lot is just past the entrance station at the Visitors Center. All vehicles must park in the parking lot.

Along windy Highway 1 north of San Francisco, the landscapes and colors of the the farms, mountains and open space sometimes are muted in foggy mists that blanket the scenery and create a feeling of mystery. Often as you arrive upon a bend where you notice an odd architecture, you have found your way to the once Russian settlement of Fort Ross.

Russians established Fort Ross as an outpost for trade in the early to mid 1800's . Along the Russian River and Fort Bragg, north of Fort Ross, are many of the Russian cultural influences from that era.

Near this landmark, Highway 1 features a scenic spread of lush green rolling expanses with relaxed cows sitting up to the road's edge, munching on grass on steep hills and inclines. Be sure to plan ahead for necessities when traveling this route so you can enjoy the environment, as there are few road stops with restrooms, gas for your car or food. Jenner 12 miles away is your best, closest bet for such services and goods. It's ironic that there are no supplies, as Fort Ross once was the center of commerce. However, tougher time and cutbacks in the California State Parks system that operates the Visitors Center and other services at Fort Ross have included expanded closures as of this publication. Be sure to check current opening times at parks.ca.gov.

Fort Ross does offer restrooms, a picnic area, a visitors center and free parking. Maintained under the California State Parks system, several buildings at Fort Ross include a stockade, the first Russian Orthodox chapel south of Alaska, and the Commander's House, which contains exhibits of the Russian-American Fur Company and the Russian occupation. Be sure to stop and get out of your vehicle to wander the grounds and try to imagine what life must have been like 200 years ago. Russian American Company Outpost

Russian Ivan Alexandrovich Kuskov established this colony in California as a food source for Alaska and to hunt sea otters. Kuskov arrived at Ross in March of 1812 with a party of 25 Russians, many of them craftsmen, and 80 native Alaskans from Kodiak and the Aleutian Islands. For thirty years the company hunted sea otter, set up working farms, established relations with local Native Californians, traded with Spanish Californians and later the Mexican government as well as merchants who traveled to the North Pacific for the fur trade.

• A commercial trade port in California.
• Ships on North America's West Coast. Four ships were constructed at the Ross colony in Fort Ross Cove.
• Settlement Ross was the first to have a full-time blacksmith in
California.
• Some of the first weather statistics in Northern California.
• 170-year-old Rotchev House, the oldest surviving building north of San Francisco. It is a National Historic Landmark.
• The first vineyard north of San Francisco featuring over 2,000 vines.

Several buildings in the park have been reconstructed, including the first Russian Orthodox chapel south of Alaska, the stockade, and four others. The park has a visitor center and bookstore that features one of the largest Russian History libraries in the north state. Volunteer programs include living history events. Visitors from Russia are a daily occurrence along with many travelers from around the world.