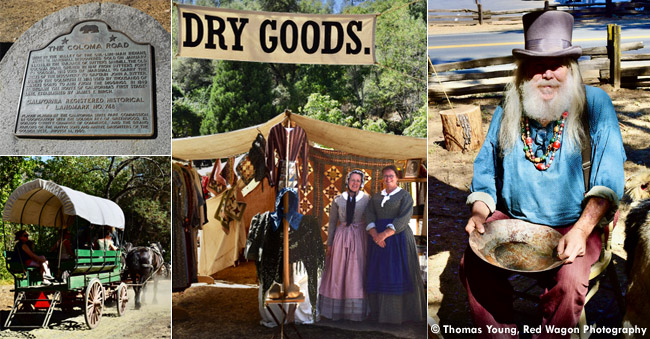 All California explorers are interested in the history of gold discovery across the state. Sutter's Mill in Coloma is ground zero in California.

Coloma is located thirty-six miles northeast of Sacramento near Placerville on State Highway 49. The American River runs through Sacramento and Coloma is on its South Fork. Whitewater thrills. Beauty and serenity. An easygoing climate. Friendly folks. All of that is here in the Coloma Valley.

Visitors come for the great rafting and kayaking up and down the clear, swift waters of the South Fork of the American River, estimated at more than 80,000 annually. Many folks come here for camping and fishing with hundreds of campsites, many of them at the river's edge.

But back on January 24, 1848, an event occurred in Coloma that would radically impact the history of California and the nation. James W. Marshall was building a sawmill for Captain John Sutter, using water flowing from the American River. He noticed several flakes of metal in the tailrace water and recognized them to be gold. Though he tried to keep it a secret, the word spread quickly, triggering the California Gold Rush of 1849.

Tens of thousands of immigrants poured into California during 1849. By the 1850s miners were coming from places all over the world—Britain, Europe, China, Australia, North and South America.

When the "gold rush" petered out, many weary miners headed home. But others took a second look at California and liked what they saw. These hearty pioneers found the land unbelievably productive, and ultimately California's great wealth came not from its mines but from its farms. California, with its diverse population, achieved statehood in 1850, decades earlier than it would have without the gold.

In Coloma you can visit the site of Sutter's Mill and view an operational replica of the Mill. Marshall Gold Discovery State Historic Park also features several museums, many original and restored buildings, and costumed volunteers. Adults and children alike enjoy panning for gold at several locations in the park.

Park activities include guided walking tours, a Blacksmith shop, Mining Methods Museum, Wa Hop Chinese Museum, Marshall Gold Mercantile and a reproduction of Sutter's Mill. Pick up a map from the museum and take a self-guided tour of the town, the cemetery, the Monument Trail, and the Monroe Ridge Trail.