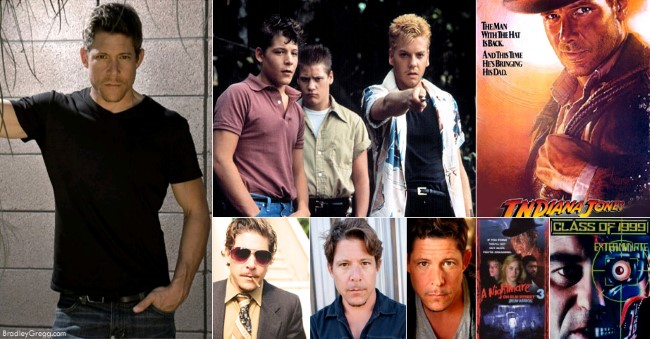 Hollywood--He's Back. You probably admired his acting skills in the award-winning mini-series, Lonesome Dove, the film hits Indiana Jones-The Last Crusade, Stand By Me and A Nightmare on Elm Street, as well as the popular TV shows, ER, 21 Jump Street, Silver Spoons and Growing Pains. But you probably lost track of handsome actor Bradley Gregg the past 15 years because at the height of his show business success, he dropped out of Tinseltown to focus on his family, instead of himself.

Bradley got caught up in the fast lifestyle of an in-demand actor, who earned some of the best roles around. He enjoyed playing alongside Tommy Lee Jones, Robert Duvall, Jeff Bridges and Robin Williams. "But my marriage was suffering, I got caught up in myself and when one of my best friends and fellow actors died, I said enough was enough and took my wife and our two young boys to Scottsdale, Arizona, where my life turned around and we became involved in Christian ministries," he said.

"I'd been raised in a broken home and didn't want that to happen to my family," said the sincere 45-year-old (he looks 25), who met his screenwriter wife, Dawn, while acting in Silver Spoons (1986-87). In Arizona, they wrote and produced Christian films. They also adopted two daughters from outside the US and had another, increasing the family to 5. The children were home-schooled by Dawn.

Last year, after 15 successful years of Christian ministry in Arizona, the family decided to return to Hollywood. "We prayed about it and asked God to help direct us to where we should be, where we could make the most impact," Bradley recalled. "Then, as a family, it was a collective decision and we moved to Los Angeles."

The future looks bright for the family here--one of his sons is a budding filmmaker, another, an actor, who was signed to be a Ford Model, his wife is screenwriting. Ironically, many of the people who helped Bradley get established as a star have moved on. "For me personally, it's like starting all over," he said. "I'm open to any roles." He has been the lead, the tough, the nice guy, the comedian--you name it, Bradley has portrayed it.

He still is a very popular guy with his fans. They lined up to purchase his movie/TV acting photos in the Long Beach Convention Center at the recent Long Beach Comic and Horror Con. With his intelligent aide and daughter Jemima at his side, Bradley signed autographs, just like "the old days." Actually, his whole life story would make a great Hollywood script. If you would like to contact him directly for potential acting roles or other information, his email is viagesu@gmail.com. His website is BradleyGregg.com.