Surfing Father Christian: An 87-year-old Blesser Who's a Blessing 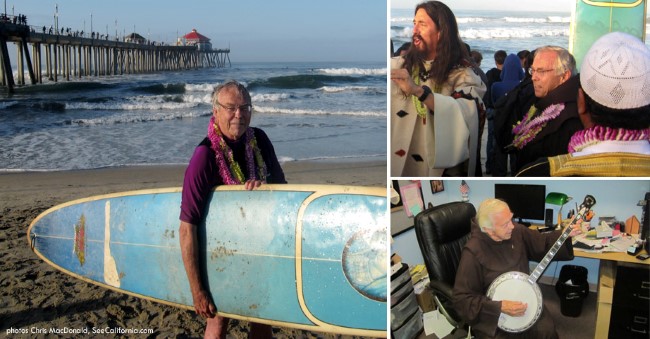 When Father Christian Mondor takes part in Blessing --babies, children, adults, and even water, he does it with feeling because of his lifelong love of people and especially the ocean.

"There's a spiritual side to surfing, a time of quiet contemplation," said the 87-year-old longboarder." A lot of surfers find the time between the waves is a wonderful time to pray and be thankful. As you rise and fall with the swells, there's a real beauty and peacefulness to it. It's just a wonderful feeling."

"Out on the water, you look back to see beautiful palm trees and, sometimes, snowcapped mountains. Pelicans glide by with their gracefulness and dolphins may ride the same wave with you."

The Franciscan Friar's favorite board is 9-foot-6 and he has enjoyed using it in the Pacific Ocean--north of Huntington Beach Pier, at Bolsa Chica State Beach and Old Man's Beach in San Onofre. "The first time I went out with the longboard was on my 70th birthday," he said. "A friend taught me and I found that it didn't require as much skill and balance as a short board."

The Vicar Emeritus still bodysurfs in the morning at the foot of Magnolia, a beach only two miles from Sts. Simon & Jude Church, where he has been "blessing" for 22 years.

The International Masters Swimming Championships' Gold Medalist glows when he talks about the sea, chats with a parishioner or sings in the church choir.

Father Christian, who swam around the HB Pier numerous times, is so full of life, love, sincerity and wisdom, he's a joy just to be around. But the longtime member of the HB Interfaith Council said he's the one who's blessed because of the great church, fantastic parishioners and his passion for learning about different religions and cultures.

"I've found out it's really incredible how much we really have in common," said the man with twinkling eyes and a radiating smile.

The humble man of many talents also plays banjo and breaks out in songs, which surprise and provide joy to everyone lucky enough to be within ear distance.

Father Christian is a celebrity in his own right. What else would you expect from someone born in Hollywood? "My parents sold our house to a vaudeville couple, who had a daughter that became known as 'Judy Garland,'" he said. "She was living in that house when she got the role of Dorothy in 'The Wizard of Oz.'"

Ironically, the Mondor family moved to Westwood, where, in the 5th Grade, his classmate's grandfather was L. Frank Baum, author of "The Wonderful Wizard of Oz."

Talent ran throughout the Mondor family. His sister Carol was a professional ice skater, who toured with World Champion Sonja Henie.

Father Christian received a key to the city two weeks after World Surfing Champion Kelly Slater got it. It's only fitting, since the Surfing Father is indeed a true treasure, a blessing to HB and surfers everywhere.

(Sts. Simon & Jude, which has nearly 4,000 households as parishioners, is celebrating it's 100th Birthday. The church just had a $5 1/2 million renovation, including a new bell tower. )