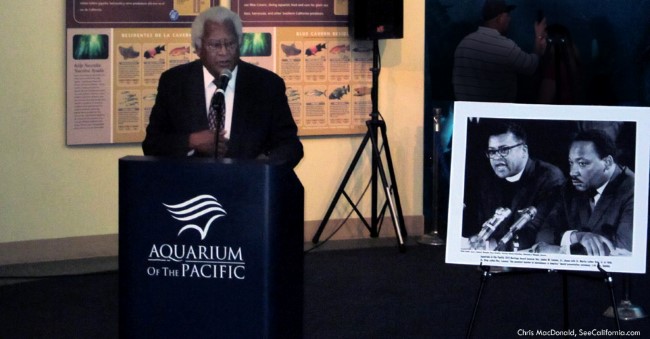 Long Beach, CA--Rev. James M. Lawson, Jr., a pioneer in the Civil Rights Movement and a teacher of non-violent activism, was honored with the Heritage Award during the 11th Annual African American Festival at the Aquarium of the Pacific.

King, who had met Lawson at the Oberlin School of Theology, urged him to come to the south and take an active role in the National Civil Rights Movement. He moved to Nashville and began teaching workshops in non-violent direct action, which he had studied in India. Among his students were future Civil Rights leaders and others. Throughout the 1960s, Lawson was active in the Civil Rights Movement in Memphis and Nashville, where he was a Freedom Rider. In 1968, Lawson invited King to speak to striking sanitation workers in Memphis. Dr. King came and gave his famous "Mountaintop" speech the day before he was assassinated.

In 1974, Lawson moved to Los Angeles where he served as pastor of Holman United Methodist Church for 25 years. He continued working on behalf of social justice causes, including immigrant rights and international peace efforts. Lawson also continues to educate at universities, such as Cal State Northridge and Vanderbilt.

After accepting his Heritage Award, he said, "It's so very important for us to recognize the Aquarium of the Pacific, other aquariums, museums, libraries and schools as essential for people to develop their possibilities. They connect us with our history."

Afterwards, I asked Dr. Lawson what Dr. King would say if he was here today. "Martin King would say we've seen some positive changes but we need many more," the 85-year-old said. "One of my main concerns is that we have the fastest-growing generation of functional illiteracy. And these current issues around guns and debt are really rooted in spiritual forces of wickedness, which emanate from racism, sexism and violence. There's still a lot to be done but we're working on it."

The African American Festival helped draw thousands of people to learn about the sights, sounds and history of African Americans as well as the wonders of the Pacific. I commend Aquarium President/CEO Jerry R. Schubel and his staff for bringing such interesting programs to the spectacular non-profit institution at 100 Aquarium Way, Long Beach. Find out what else is happening there at http://www.aquariumofpacific.org