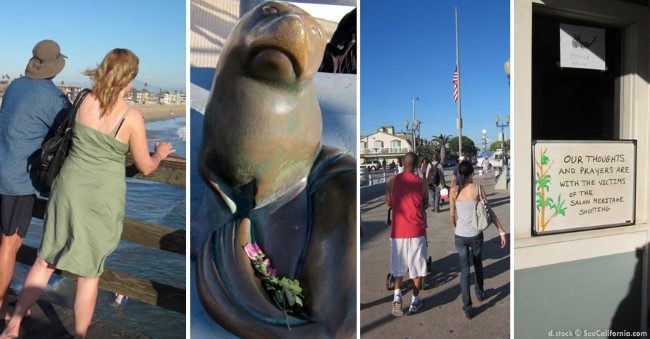 The stunned community and visitors to Seal Beach all are leaving flowers, messages, and remembrances. The flags fly at half staff, and passers-by put flowers on Slick the Seal, a bronze statue at the Seal Beach Pier.

The message board in the window of Kinda Lahaina restaurant on Main Street includes the words: Our thoughts and prayers are with the victims of the Salon Meritage Shooting.

The victims are: Victoria Ann Buzzo, 54, of Laguna Beach, a salon employee; David Caouette, 64, of Seal Beach, who was shot outside the salon in his car; Laura Lee Elody, 46, of Huntington Beach, an employee who had recently married and who many people knew as Laura Webb; Randy Lee Fannin, 62, of Murrieta, the owner of the salon; Lucia Bernice Kondas, 65, of Huntington Beach; Michelle Daschbach Fast, 47, of Seal Beach; Michelle Marie Fournier, 48, of Los Alamitos, a hair stylist and the ex-wife of alleged gunman Scott Dekraai.

The ninth person shot Wednesday was Hattie Stretz, 73, the mother of Elody, who was last listed in critical condition but improving at Long Beach Memorial Medical Center.

Dekraii is accused of killing Fournier and seven others in a shooting Wednesday at a beauty salon in Seal Beach. Scott once piloted catamarans to Catalina Island for Catalina Express. He then worked on a tugboat where he was involved in an accident that took the life of Piper Cameron, also of Huntington Beach.&