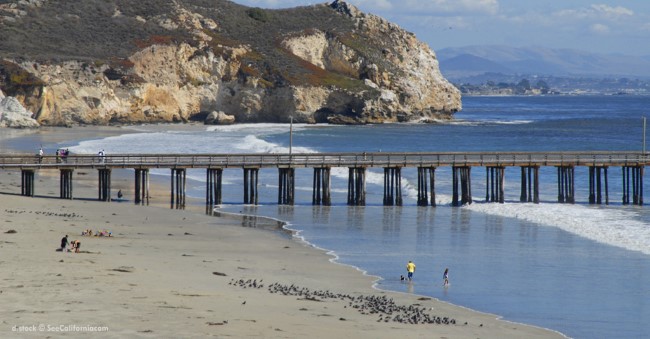 Avila Pier is the popular pleasure and fishing pier next to the shops, hotels and restaurants in Avila Beach. The piers (there are three--two public, one private) have an interesting history. As to how they came about.

In 1876 Avila Beach enjoyed a fair tourist trade as travelers stayed overnight at Marre Hotel built to lodge the ship passengers docked in town. A narrow gage railroad was built several years later and later a federal breakwater funded by congressional action was constructed in 1893.

It provided safe anchorage for passengers and valuable products such as cattle and agriculture goods unloaded from ships and placed on trains headed to market. In addition to legal trade, smugglers brought liquor into the bay, protected by a network of locals who helped this form of commerce succeed.

Pirate's Cove located around the bend south in a protected cove out of view of today's Avila Pier and the historic Harford Pier offered a hidden spot for bringing liquor ashore in the dark of night. This hidden spot more recently has been popular for natural -nude sunbathing. Other locations along the coast known for alcohol interests were Aptos - Seaside where the cement ship was used as a gambling and party boat (it now sits in decay in the Pacific Ocean) and Seal Beach where rum runners also brought alcoholic beverages to the Southern California coast via sailing vessels.

When the Great Depression arrived in the early 1900's and several world wars shifted focus from trade to defense, all hands were on deck for a different program. Like the Cement Ship near Santa Cruz, Harford Pier was ignored and went into disrepair.

In the 1950's it was still privately owned but was sold for use as a public pier. An infusion of cash went into renovating the pier to again promote commerce. While some hoped to see this protected harbor grow into a larger venture, others fought against that effort, hoping to keep the treasure that's tucked away a less trafficked entity.

Tourists visiting the Central California coast enjoy Avila Beach with its golf course, beautiful beaches and piers, dining, hotels with spectacular ocean views, a weekly summer farmer's market, and many other activities. You will find Avila Beach by exiting Highway 101 north of Pismo Beach and south of San Luis Obispo. Just follow the windy road into town and enjoy free parking near the beach in a large public lot.