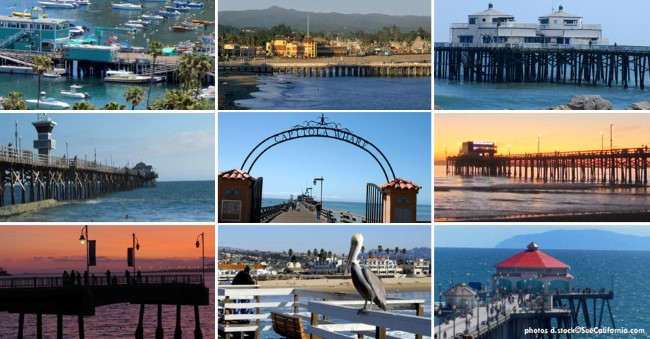 California piers and wharfs historically began as over-the-ocean platforms for unloading & loading cargo onto ships. During the time when the only personal vehicular traffic was by horse and stage coach, an infrastructure of steam engine trains was built as close as possible to the piers and wharfs. It was the best mode of transportation for getting the food and products to the growing town and cities.

As California grew during a 50 year period from 1850 to 1900, a new, popular form of entertainment was invented in California to entice tourists and settlers to the far reaches of California's beaches. Pleasure piers were created in grand style, complete with amusements, roller coasters and were often connected to additional entertainment popular during the prohibition--rum runner gambling ships off shore.

From San Diego's Belmont Park with The Plunge Pool (still in operation) at the beach to Seal Beach's Scintillator Thrill Ride, Long Beach Pike (re-created recently minus the rides), Santa Monica Pier amusements (refurbished and operating today), the Cement Ship (now in ruins) near Santa Cruz and the most glorious Santa Cruz Board Walk, the finest example of California beach entertainment that's still operating successfully, California pier amusements brought the people to the coast and got them to do what was hoped.

They bought land, settled and now make up the largest population of California residents as coastal dwellers. Pier 39 at San Francisco has long remained an entertainment complex as well. It includes ports for boat tours, restaurants, shops and some museums. Pier 39 reflects the modern-day approach to pier development. Thrill rides are not prevalent.

The piers tend to provide a few shops, restaurants and what came into being as the Pier Fishing regulation. In the early 1900s, it was determined that while so many regulations were required to fish on the California coast, one exemption was created and remains in place--pier fishing. Unfortunately the fish caught at many of California's piers near cities are not recommended for consumption or not recommended for pregnant women or for eating in small quantities. The one free source of food is not generally a reliable food stuff for those who fish at California piers. California pier fishing is a mainly a sport.