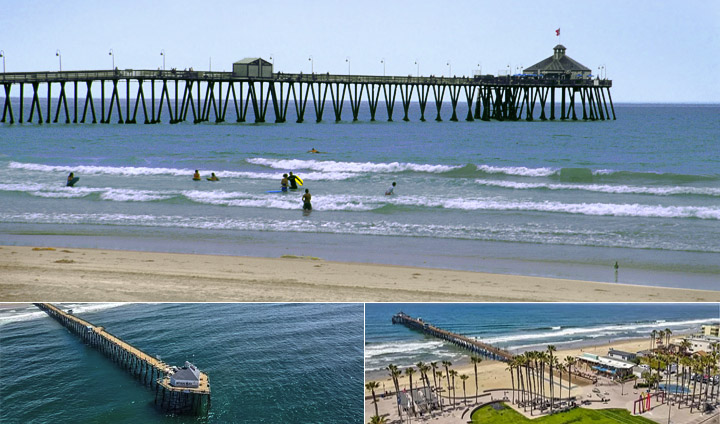 Imperial Beach Pier, 10 Evergreen Ave., Imperial Beach, CA 91932, is California's 9th longest over the ocean public pier. Fishing from the pier does not require a license, but catch regulations are enforced. At the end of the pier where it widens in an arrow shape, you can see Mexico to the south and Los Coronados Islands. The southern-most pier in California at the Most Southwesterly City in the U.S. is about three miles to the Mexico border (as the crow flies.)

Imperial Beach prides itself in its history of big wave surfing and views from the "IB" pier offer your closest look at the surf action which varies from day to day and hour to hour, depending on the waves. Benches on the pier make it easy to spend time watching.

The colorful entrance to the pier at Portwood Pier Plaza offers a tribute to the history of surf board design with a colorful collection of surfboard benches. Each bench features a plaque describing how big waves had an impact on the surfing pioneers from 1937 to the 1950s. Father of the Modern Surfboard, Bob Simmons, moved to Imperial Beach in 1950. The crowning piece of the plaza is Surfhenge.

A unique building at the end of the pier houses a restaurant, Tin Fish, serving a wide variety of seafood dishes plus breakfast and other menu additions. It features outdoor seating with umbrellas. The area is shared with the likes of pier anglers and people strolling. A small selection of souvenir cups, shirts, hats and other items are sold in the restaurant for those looking for a memento of their visit.

Pier fishing is popular at the IB Pier, and on winter days when it's gloomy or drizzling don't be surprised to see anglers fishing. Aside from people walking for exercise, this is really the primary and only sanctioned pier sport (many California piers don't allow skateboarding, bicycling, roller blading and even running.)

Imperial Beach Pier is not the only pier ever to be built in IB, with the first pier and boardwalk dating back to 1909. They were developed as tourist attractions to entice inland Imperial Valley residents to this new Imperial beach destination. That slowly decaying pier lasted quite some time as Pacific Coast piers go. It was damaged by winter storms in 1941 and gave way to nature in 1948 with the boardwalk following its fate in 1953.

Leaving a big gap in the hearts & souls of locals, they knew that having a pier was a luxury they couldn't afford to give up, even though the cost of building a new structure would cost big bucks. Through a variety of funding methods the new pier was built with its opening celebration in 1963.

But that's not the end of the story, however. Big storms that challenged other famous piers along the coast forced public closure to IB Pier in 1986. The City of Imperial Beach was committed to restoring its pride & glory to the tune $2.8 million. The pier was restored and enlarged with the current 1,491-foot length, re-opening in March of 1989. The Port of San Diego helped pay for the reconstruction.

If you get a whiff of something that makes you say "poo" during a pier visit, it's a reminder to check beachreportcard.org before you go to see the ocean water quality and conditions at Imperial Beach. Though the Port invested in a sewage treatment plant for waste flowing into the U.S. from Mexico's waters, sometimes it can't handle the job sufficiently—Imperial Beach is usually the first city to suffer. Signs are posted at the beach when water quality is dangerous to health, but you may want to know before you go.

As a side note, water quality has challenged Imperial Beach for decades, thanks to the 2 million plus residents south of the border in Tijuana. Regulations and investment in infrastructure of this major Mexican city are somewhat lacking (putting it mildly). Perhaps that explains why you can get a condo overlooking the beach in Imperial Beach for a lot less (several hundred thousand dollars cheaper) than counterparts further north in tony La Jolla, Newport Beach and other Southern California cities.