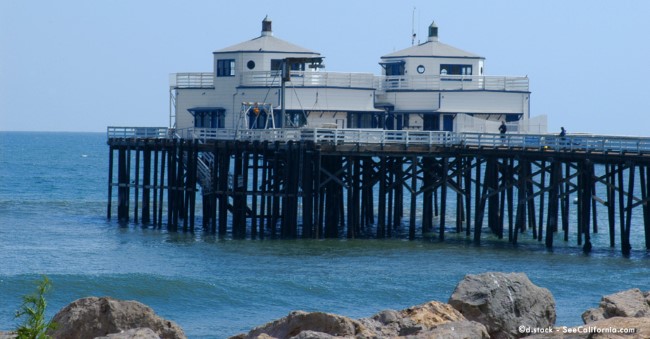 There are many piers in California, but only two in Malibu—one private Paradise Cove Pier and the public Malibu Pier. Much to the delight of the public, the Malibu public pier re-opened several years ago after needing repairs and taking quite some time to get funded and fixed. The shining, two building pier sits in the blue Pacific and from the air looks so inviting. On closer look as a seagull arrives from the Channel Island, swooping down to investigate the food offerings, he finds that there are fisherman with bait that make for some tasty snacks on this free fishing pier.

Parking at the Malibu Pier is somewhat limited  -- you must expect to pay either in the small parking lot or spaces along the street. The Malibu Pier is 780 feet in length—pretty short by California pier standards, and ranks around 26th in length of over-the-ocean piers (Santa Cruz comes in as the longest.) For strolls, it provides an easy walk to the end and back again, ideal for all ages.

Its storied past and re-birth (re-0pening) involves years of effort at finding funds and just the right partners to operate concessions. An entrepreneur sold t-shirts and gift items with Malibu Pier logos, and was asked to stop by the California State Parks. The trademark tussle ensued with the State coming out the victor in the deal. Hearst Castle is another of the State Parks holdings that is trademarked.

Malibu Pier has two great dining options -- Malibu Farm Cafe at the end of the pier and Malibu Pier Restaurant at the beginning of the Malibu Pier. Both offer a popular menu reflecting the preferences of health-minded consumers with plenty of vegetables, fish and locally-sourced produce from local farms, providing freshness.  See: malibu-farm.com

Malibu is known for 27 miles of coastal beauty, advertised on local road signs on Pacific Coast Highway 1. As you drive the coast in this north Los Angeles County beach city, you discover that the signs don't lie. Malibu is beautiful as the road twists and turns, always way the Santa Monica mountains in view. The only range of mountains in the U.S. running through the heart of a major city such as L.A., the mountains are part of the transverse ranges that oddly run east-west. You can hike around the mountains of Malibu or simply enjoy the views from the Malibu Pier.

Malibu Creek State Park Campground is open all year round and is located just 25 miles from downtown Los Angeles. The park has over 4,000 acres, featuring hiking, fishing, bird watching and horseback riding opportunities. There are 15 miles of streamside trail through oak and sycamore woodlands an chaparral-covered slopes. Twenty-five-mile Malibu Creek in the park is the principal water-course of the Santa Monica Mountains - from Boney Mountain to Malibu Lagoon. parks.ca.gov