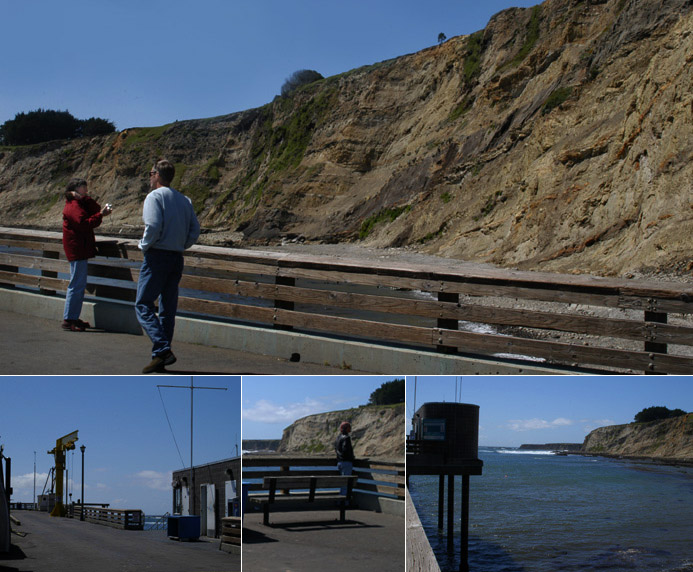 Point Arena Free Public Fishing Pier photos above show a small pier with a cement deck. Point Arena's 330-feet long public fishing pier is the hub for fishing activities but is also popular for launch of pleasure craft, kayaks and surfing. Pier fishing, charter fishing vessels for tourists and commercial fishing vessels all use the Point Arena Pier which was reconstructed around 1983 when a storm destroyed its predecessor.

This fairly new pier which replaces one that was storm damaged  and not worth saving opened in 1987 to the tune of over $2 million. From our tourist visit and impressions, this pier has "fishing" written all over it. There were lots of cars in the parking lot and those who visited the pier were either hauling in their catch or enjoying the free fishing from this public pier.

When you drive up to this pier in your car, you'll see fisherman in blue jeans and ball caps hanging out by the cars "chewing the fat" with fishing tales after a return from their sea adventures. Point Arena is north of Bodega Bay and south of Mendocino in an area that takes time to reach, giving it a very tucked away and somewhat isolated look and feel. The folks are friendly but seem unpretentious.

While the pier itself is challenging to photograph (except from the water), the Point Arena Lighthouse is worth a visit and offers stunning photo opportunities.

The PA pier is in Arena Cove, the Wharf Building with Arena Cove Bar & Grill and a mercantile gift shop. Other businesses include a coffee/bait & tackle shop, and a Best Western hotel atop the hill, offering stunning views of the ocean from one side of the property. Special events that transform the cove to a community meeting place include Independence Weekend street fair and fireworks display put on by the City of Point Arena and the Annual Fisherman's Harbor & Seafood Festival.

During the year, you'll find mostly fishermen using the pier.

If you're looking to fish, anglers rank this pier among their favorites in the entire state! Striped seaperch, seatrout and cabezon often go for shrimp bait, with just a piece of it generally enough to lure them.

Piers and wharfs have served the region's fishing and commercial interests since 1866, shortly after the Gold Rush when the entire state began to grow.

While the majority of the charter boats in Point Arena target West Coast fisheries, a handful of Point Arena community members have previously purchased Alaska sportfishing licenses. A hoist for boats is located on the pier, plus fish cleaning stations and several benches for sitting. Restrooms & showers are available, and a small office is open daily, charging fees for launch of both commercial and non-commercial craft.

There's virtually no beach in this cove so for sunbathing and beach activities, your best bet is to the south or north at Schooner Gulch State Beach, Bowling Ball Beach, Mote Creek Beach and Manchester State Park. The activities around and on this pier are the occasional sighting of whales, fishing, launch of boats and kayaks, surfing and some diving. The surfing ranks as intermediate to advanced. Dangerous rocks and ledges on the inside should be watched.

While the Arena Cove has been home to a series of piers (and even two wharfs at one time), it once was heavily trafficked as a port for export of goods. Its history is documented to nearly 10,000 years when bands of Indians lived near the sea and fished primarily for food.

During the 1800's traders from China used the port to bring silk, tea and goods to the mainland. An extensive rail system in the late 1800's and early 1900's impacted what was once a busy, commercial region. Tourism is one of the region's mainstays today. A higher-than-average percent of the population lives below the poverty line. Like so much of California, the boomer community entering retirement will no doubt impact this sleepy hollow region at some point. Point Arena will most likely be filled with golf courses and planned communities. While the land sits in an earthquake zone, many heavily-populated areas of California sit on fault zones, as well.