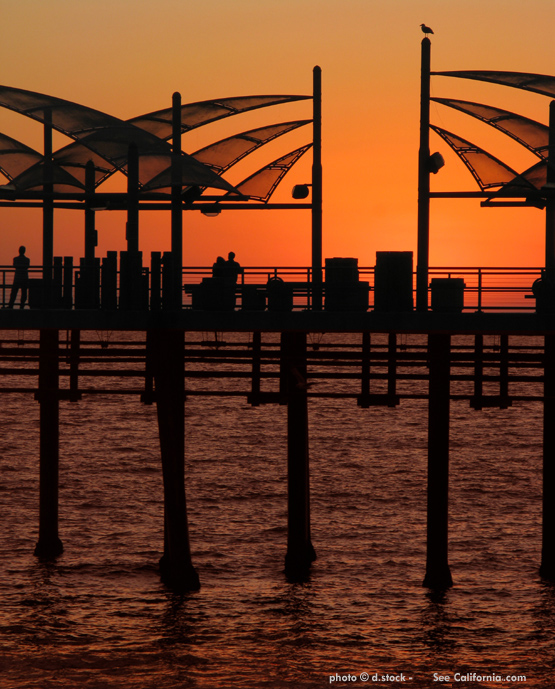 REDONDO BEACH, CA--Truly the icon of this glorious South Bay (L.A.) destination, Redondo Beach Pier is the city's hub of entertainment and fun. With a pier that doesn't measure itself like any other (defined by feet in length) Redondo Beach's pier is measured by cubic feet of space. Why? It more of a circular shape which loops around from one point of dry land to another. Maybe it misses out in bragging rights of the longest pier (Santa Cruz) or others on the list, but lack of convention doesn't seem to bother locals or visitors one bit.

Busy every day and night, thanks to its ocean view restaurants and popular outdoor fish market with casual picnic seating in covered areas overlooking the harbor, people come to Redondo Pier to eat. The smell of fried fish wafts through the air, an inviting scent those who are hunger -- or not.

As an anchor of the beach, Redondo Pier features unique art treatments that look like sails, creating silhouette shapes in the late afternoon with the setting sun. The pier has had a manager who plans events such as the annual car show, weekly or monthly yoga on the pier, fireworks and summer concerts on the pier, just to name a few activities that are free to see.

Located approx. 8 miles south of Los Angeles International Airport (LAX) the pier can actually be enjoyed on stopovers and flight delays -- but you better give yourself a couple extra hours when beach parking is at a premium and airport security at one of the nation's busiest airports requires long waits to check back into secured areas for your flight.