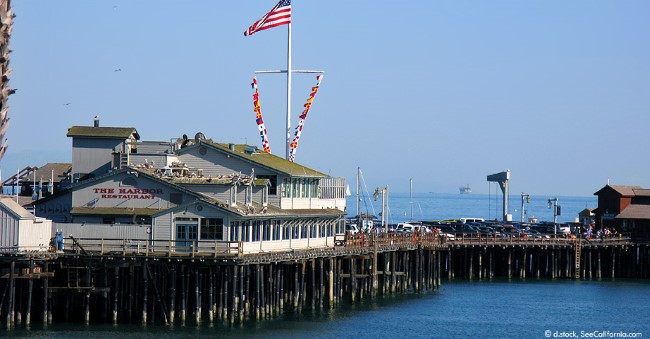 Stearns Wharf is the most visited attraction in the city of Santa Barbara. The popular beach destination features sand beaches, a lively downtown, historic mission, and of course, the pier. It is an icon. As the most visited landmark in the city, the wharf provides views you'll not fully appreciate till you visit and stand, gazing offer the city and mountains beyond.

Stroll along this wooden planked pier and enjoy the sounds--the thump, thump of cars driving over the wooden planked surface. You can drive your car onto the pier, park it, and wander to shops and restaurants.

Stearns Wharf is the gateway to State Street shopping district but offers its own little piece of tourist paradise with shops selling a variety of touristy items such as souvenir t-shirts and hats. Be sure to get your parking validated when you make purchases on the pier!

A dolphin fountain at the entryway to the pier is a gathering spot for tourists who either veer onto the pier, explore the beaches, or use the fantasts paved sidewalk paths heavily trafficked with joggers, skates, and people walking.

You can walk over to Stearns Wharf from many hotels on Cabrillo Street overlooking the Santa Barbara beaches and pier.

Pier history: From rum runners of the prohibition to gamblers on floating casinos and then to military units standing guard over the coast during World War II (Santa Barbara was the only location where enemy fire actually hit land at the beach near Baraca Resort), Stearns Wharf could tell many great stories if it could talk. Built in 1872, the wharf ranked as the longest deep-water pier between Los Angeles and San Francisco. During that era, bragging rights were crucial in pier size and water depth for getting ships to stop at your location to help promote trade to your town. John P. Stearns worked in the lumber industry and built the wharf for this very reason. With a useful wharf, ships could stop and access the supplies of lumber to be delivered elsewhere. This was the era in which train tracks were still be installed and would one day impact the local port trade both in Santa Barbara and up the coast a short distance in Casmalia.

When the railroad finally reached Santa Barbara in 1877, Stearns added an additional spur to the wharf, and later in 1923 that was abandoned as it was no longer of use. A railroad logging car on the spur commemorates the wharf's history. Stearns Wharf has been rebuilt after several times after fires have damaged the structure.

The most recent event occurred in 1998 and the damaged area was rebuilt while the rest of the wharf remained open.

During World War II the Harbor Restaurant was built on the wharf. Opened in 1941, it is still in business today. There are shops, restaurants and great fishing off Stearns Wharf. You can drive your car on the wharf but you must pay for parking which is sometimes limited. The wharf offers fantastic views, great meals, a maritime museum and a bit of souvenir shopping for those seeking good, old-fashioned fun.