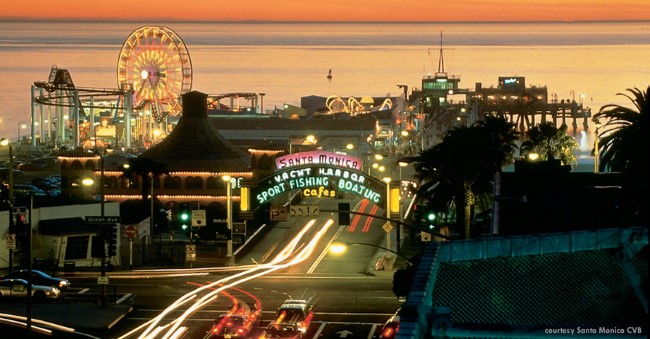 Santa Monica Pleasure Pier, the Most Fun Pier in California

From the pier amusement that includes an historic carousel and a solar powered Ferris wheel, to the beach filled with sunbathers, it's just a stroll across the road to shopping and dining at Third Street Promenade.

The most entertaining pier in all of California is the Santa Monica Pier. You can travel the coast and not find anything like it, anywhere! Sure, Santa Cruz has its beach boardwalk that's over 100 years old and is filled with amusement rides, but that's on the sand–not over the water. And some may argue that Pier 39 in San Francisco rivals Santa Monica Pier, but that pier doesn't provide the over the water” sensation that Santa Monica offers.

Santa Monica opened its first pier in 1909 as a wharf to to carry trash offshore. The 2nd pier built has a storied history as a pleasure pier–it's the pier you will enjoy when you visit Santa Monica today.

How it came about–In the heyday of Coney Island when all of California's beach destinations began luring tourists with exotic sounding rides on wharfs and piers next to he ocean, San Monica rightfully claimed its spot with a pier called the Santa Monica Pleasure Pier. Opened by well known carousel builder Charles Looff, the pier was an instant hit. Its fate could have been the same as other piers along the coast that once were but now are only memories in the minds of those who enjoyed them.

An effort to turn Santa Monica Pier into an island with a convention center (similar to Long Beach, perhaps) was rebuffed by locals and in 9 years between 1973 and 1982, a permanent plan was enacted to maintain the pier as a pleasure pier for all to enjoy. Santa Monica Restoration Corp. began the work to restore the Looff Carousel you can ride today, and a set of pier regulations made a permanent provision for the pier to remain a pier, open to the public for pleasure. Pier-iod.

The famous storms of the early 1980s damaged Santa Monica Pier with a 45,000 square foot piece out of its deck gone. Citizens and the pier committee quickly went into action to rebuild. It took less than 6 years to complete the project between 1983 and 1989. The official opening didn't occur till 1992, however. It contained a 70,000 square foot Pacific Park fun zone with a Ferris wheel, Looff Carousel, rides and games that you can enjoy now. It's estimated that around 4 million visitors walk on the Santa Monica Pier annually, dining at its restaurants, riding the old-fashioned amusements and playing games such as air hockey. There are many street artist vendors and entertainers along the pier on most summer days, offering balloon art, painting portraits and selling all kinds of novelties.