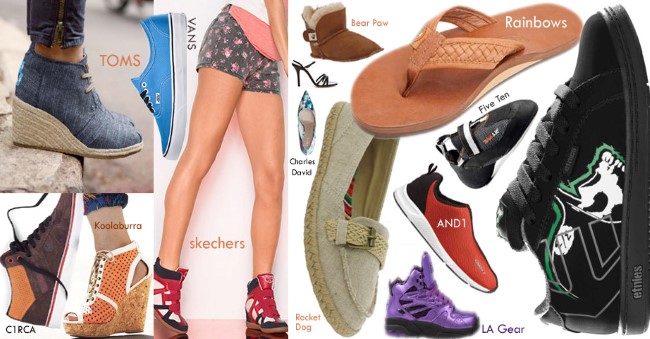 You wouldn't necessarily think that California would be the best spot for shoe manufacturing. The reality is that many shoe companies are based in California, though few actually manufacture their products in the U.S. However, their corporate offices and marketing jobs are based in the Golden State, which generally equates to better paying, service-oriented positions that are believed to help the economy. And of course, there's that name recognitions that a particular items came from cool California.

Here is a list of shoe design & manufacturing firms and as you read about them, you discover several trends: shoes for sports, action sports, and celebrities. From Goleta to Santa Barbara, San Clemente to Carlsbad, and Los Angeles to San Diego, there's something about California that makes entrepreneurs want to launch concepts and sell shoes in this West Coast leader of fashion-forward thinking.

Bearpaw
Founded 2001
Founder: Tom Romeo
Headquarters Citrus Heights, California, U.S.
Area served Worldwide
Products Footwear
bearpawshoes.com
Bearpaw is a brand of footwear founded by Tom Romeo in 2001. Bearpaw products are made from sheepskin, best known for producing ugg boots, as well as slippers and casual footwear for men, women, and children.
Bearpaw entered the market in 2001, and is based in Citrus Heights, California. Their signature product is sheepskin boots The main brand competitors are UGG Australia and EMU Australia, both of which produce sheepskin boots and other similar footwear. The UGG Australia brand has been a popular fashion trend among young women since the early 2000s. Bearpaw footwear was introduced to the market as an alternative to the popular UGG brand. Bearpaw products are more cost effective than UGG Australia products as they use sheepskin lining which is either glued or sewn onto a leather outer. This is a different material than twin faced sheepskin which is just sheepskin with the wool still attached.

Circa
Circa Footwear
Founded 1998
Headquarters San Clemente, California, U.S.
131 Calle Iglesia, Suite #200
San Clemente, CA 92672
United States
Phone: (949) 369-8730
Products Skateboard shoes, clothes, hats, accessories
c1rca.com
Circa is a skateboard footwear and apparel company that started in 1999 and is based in San Clemente, California.
It was started by Four Star Distribution along with Chad Muska as its first professional rider.

KEEN, Inc. is an American shoe manufacturing company founded in Alameda, CA, now based in Portland, Oregon. Founded in 2003 by Martin Keen and Rory Fuerst, their shoes are now available in more than a thousand retail locations in the United States, and are distributed worldwide
Key people Rory Fuerst, owner
Products Shoes and boots
keenfootwear.com

Koolaburra, Inc.
1220 State Street
Second Floor
Santa Barbara , CA 93101
koolaburra.com
(805) 962-6940
Koolaburra is a privately held American importer of authentic sheepskin footwear founded in 1991. They are based in Santa Barbara, California. Their boots are made in China, Spain, Portugal, or Australia. In 2005, they lost a lawsuit with Deckers Outdoor Corporation about the use of the term "ug" in reference to Australian sheepskin boots.

LA Gear (or L.A. Gear)
The American shoe company based in Los Angeles, California. It is owned by ACI International. One of the original athletes to endorse L.A. Gear shoes was NBA player Kareem Abdul-Jabbar, who ended a long association with Adidas to sign with the upstart company toward the end of his playing career.
lagear.com

Rocket Dog
24610 Industrial Blvd.
Hayward, CA 94545
Rocket Dog is a women's shoe company based in Hayward, California. They were founded in 1997 in Southern California, and were named after one of the two founder's pet dog, who enjoyed running on the beach. Their initial product lines emphasized beach and casual wear, and now includes a full range of women's shoe styles. Their shoes are sold in Europe and Israel as well as the US. They expanded their UK business in 2012, starting from a base of about 120 retailers there.
rocketdog.com