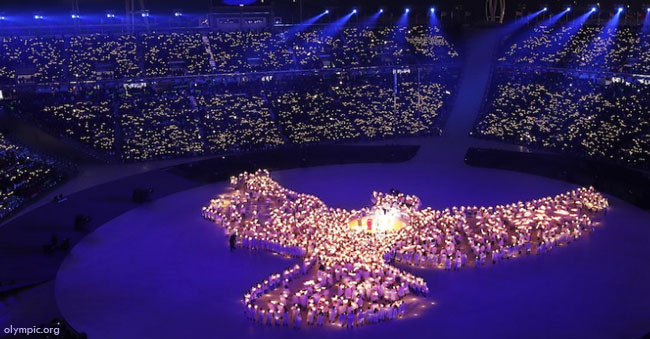 I'm not an Olympic athlete but I feel like one, when watching the Winter (or Summer) Games. I never fell after a triple axle, never jumped the gun in speed skating, never missed a gate in downhill skiing but I wince and really feel for the athletes who have. I can taste the thrill of victory and the agony of defeat as if I'm a competitor or member of the team.

I get goose bumps and am so proud as our team enters the stadium, marching behind our flag, many singing our anthem. I'll be glued to the TV through Feb. 25th, rooting for athletes at the 2018 Winter Games in South Korea.

Sometimes, I admit, I'll root for a participant from another country, maybe because he (or she) is a real underdog, who isn't given a chance but ends up with the performance of his life.

One thing I learned from being a former docent at the Huntington Beach International Surfing Museum is that many of the people you meet from around the World—no matter what country they're from—are really nice folks—they're the same in many ways. Regardless of their culture or background, you'd love to have them as your neighbor.

The Olympics reinforce that finding, that feeling, and many friendships are made among the athletes from different nations. I wish the true Olympic Spirit would be contagious and spread around the World to be truly loved and appreciated everywhere, all the time.

I don't know any of our Winter Olympic athletes but I grew up in Northern California a few houses from Vikki de Vries, who at one-time was ranked 2nd Nationally and 7th in the World in Ladies Figure Skating. She won Skate America, Skate Canada and 5 International events. I'm sure she's watching TV, following her fellow skaters and others.

Growing up, my family had ties with several Summer Olympic coaches. My father was a good friend of Julius Menendez (Boxing), who was Cassius Clay's coach, when the fighter won a Gold Medal in the 1960 Games; Yoshiro Uchida (Judo), who helped train many Gold Medal athletes, and Bud Winter, who turned San Jose State into "Speed City," winning the 1969 NCAA Outdoor Track and Field Championships. He was an Olympic coach, who helped many speedsters win Gold.

I once ran a time trial for Winter and met one of his greatest track stars, Tommie Smith, who along with John Carlos, made history with their protest at the 1968 Games. I worked at the 1984 Olympic Games in Los Angeles with Patty Loverock, a 1976 Olympian on the Canadian team and once "The World's Fastest Woman." Patty and I were in charge of an Olympic party at the LA Biltmore Hotel in 1984, which was attended by top Olympians, celebrities and had the theme of "Casablanca," complete with the actual lamps and other set décor from the original movie. It was featured in People Magazine.

Enough nostalgia, lets get to rooting the 2018 Winter Olympics in Pyeong Chang, South Korea, where there are 102 events in 15 sports. More than 2,900 of the World's finest athletes will be participating for 92 nations. Twenty-one participants are from California, including Figure Skater Chris Knierim of San Diego, Bobsledder Nick Cunningham of Monterey, Snowboarder Hailey Langland of San Clemente, Ice Hockey's Jon Blum of Ladera Ranch, Freestyle Skier Brita Sigourney of Carmel, Skeleton's Kendall Wesenberg of Modesto, and two-time Gold Medal Snowboarder Shaun White of Carlsbad. Their efforts (and the efforts of their peers) certainly typify the Olympic Spirit—a feeling we all can appreciate and share!