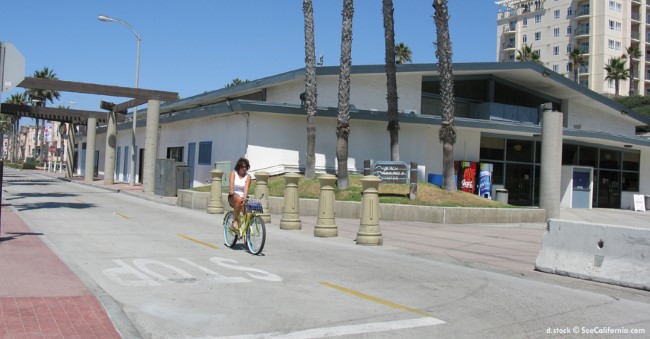 The Coastal Rail Trail is a 44 mile long bicycle and pedestrian pathway/trail that extends from downtown Oceanside to San Diego.
The Oceanside segment is the northernmost portion and begins at the
western end of the east-west San Luis Rey Recreational Trail. It is 3 miles
long and runs adjacent to the railroad right-of-way and along City streets.
The portion near the railroad is a fenced Class I bike path with exclusive
rights-of-way and minimum cross flows by motorists. The portion of the
trail located on City streets is posted to designate a Class III pedestrian
shared trail route.

The Coastal Rail Trail will span the cities of Oceanside, Carlsbad, Encinitas
and Solana Beach. This project will construct 17.6 miles of Class I, II and
III bikeways within the NCTD rail corridor and adjacent City streets. The
trail includes segments of 12' wide multi-use Class I paved paths, 5' wide
Class II bike lanes and Class III bike routes within existing roadways.