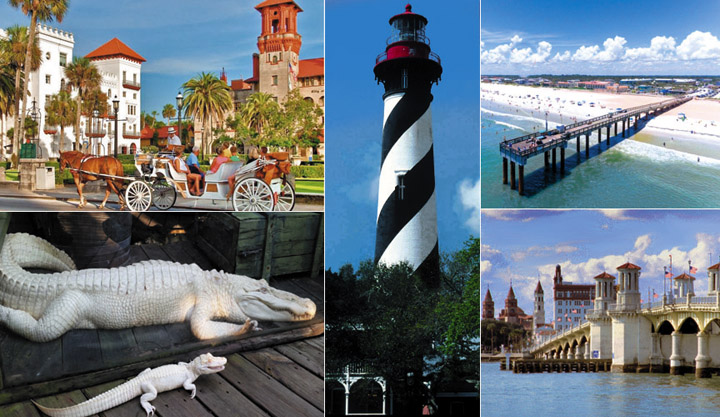 Spanish Colonial rule began when Admiral Pedro Menedez de Aviles founded the city in 1565.  Coquina rock, a mash of decomposed tiny clams (found in only 2 places in the world) settling to the sea floor over eons, was brought to shore by early conquistadors and dried into 'building blocks'.  Coquina rock quickly replaced flammable timber in the building of a permanent fort, government buildings and housing.  The rock endures today in several historical buildings such as the Castillo de San Marcos National Monument, the oldest masonry fort and best preserved example of a Spanish colonial fortification in the continental US.  The fortress withstood assaults by both the French and British for more than 200 years.

Possibly Florida's most famous visitor, Ponce De Leon, landed on shores yet to be named St. Augustine in 1513.  His search for the Fountain of Youth led him to a spring still bubbling today with fresh, cool water.

The challenge to build a settlement in swampy, humid, mosquito borne terrain called for workers up to the task.  Indentured servants from the island of Minorca in the Mediterranean sought refuge from the harsh working conditions of indigo plantations south of St. Augustine and migrated north.  Descendents still thrive as part of the present-day community.

In 1883, wealthy visionary Henry Flagler began his transformation of St. Augustine from colonial settlement to tourist haven.  The Ponce de Leon Hotel opened five years later to elite vacationers.  The hotel was the first to enjoy electricity - personally wired by Thomas Edison.  Flagler went on to build railroads, additional hotels and beautiful churches.  He is credited with launching the Gilded Age in Florida.

Ripley's Believe It or Not!

Sail with Pirates on the Schooner Freedom