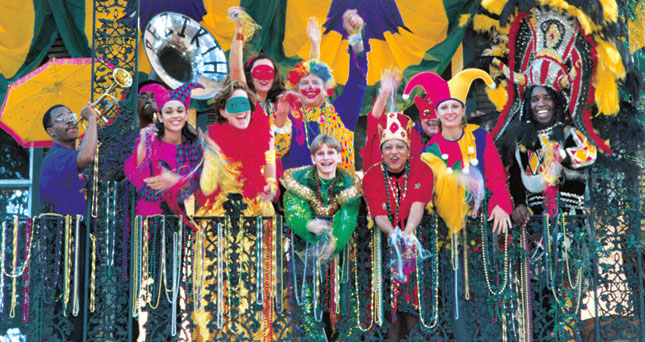 Think "Louisiana" and music and food come to mind. Lake Charles, located in Southwest Louisiana, is noted for both music and food, however, it is also known as the Festival Capital of Louisiana because it hosts more than 75 festivals and special events each year, including Mardi Gras, Contraband Days Pirate Festival, Black Heritage Festival, Cajun French Music & Food Festival, and more.

The city of Lake Charles overlooks a freshwater lake with the only white-sand inland beach along the Gulf Coast. It was my good fortune to visit Lake Charles when the Contraband Days Pirate Festival was taking place. Local folklore has it that Jean Lafitte buried contraband treasure along the white, sandy shores of Lake Charles and this legend is celebrated each May for two solid weeks.

Each day stages of musical entertainment, carnival rides, food booths, contests, fireworks and Buccaneers take over the city, complete with cannons and a mayor "walking the plank" event. Colorful boats circle the lake, cannons are fired from shore, and the mayor is captured and made to jump into the lake with his clothes on. Residents watch all of this from the steps of the seawall with great excitement and cheering.

The carnival season of Mardi Gras includes weeks of masked balls, parades and colorful merriment. Lake Charles Mardi Gras tradition and pageantry is showcased year-round in the Mardi Gras Museum. It is one of the finest displays of Mardi Gras costumes I have ever seen and is the largest in the South. Do not miss visiting this colorful museum.

Lake Charles has nearly 20 blocks of antique Victorian homes dating from the 1800's that you can enjoy a walking or driving tour of the area. The local music scene is rich with French-flavored Cajun and Zydeco music and the sounds can be heard at clubs, festivals and restaurants.

When it comes to food, Lake Charles has it all—Cajun French, Creole, jambalaya, gumbo, and crawfish are must-eat fare. Culinary claims to fame are Boudin (pork sausage,) Abe's Cajun Market Plant (stuffed chicken,) and Anna's Hand-Made pies, producing up to 3,000 pies a day.