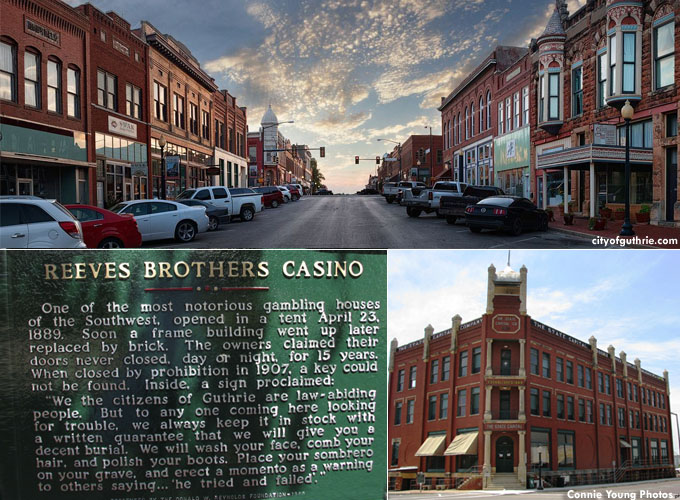 On April 22, 1889, tens of thousands of Victoria-era land seekers lined the borders of the Unassigned Lands in central Oklahoma. At 12:00 noon, the sound of pistols signaled a 6-hour stampede to claim land that transformed grassy prairie into the Oklahoma Territory. Overnight the population grew to 10,000.

Within months Guthrie became the Territory's center of commerce and government. By 1907 Guthrie housed the state capital. However , the prosperity tied to a bustling government seat was not to last. Three years later the state seal was moved to Oklahoma City and Guthrie slipped into an economic sleep.

From the early days of the Blue Belle Saloon which prided itself on never closing and a respectful burial for anyone who lost a barroom brawl, to its heyday as the state's first capital, the city has worked hard to remember its heritage.

Guthrie claims the largest continuous district on the National Register of Historic Places. Ongoing restoration since the 1980's has preserved Guthrie's rich architectural legacy and all its grandeur. Most of the original 19th century buildings remain and commercial structures have been restored. The preservation area covers 1,400 acres and 400 city blocks. A living museum of late 19th century architecture, Guthrie was designated a National Landmark Community in 1999.

Guthrie has been spared ever experiencing one of the Oklahoma's notorious seasonal tornadoes. Legend has it local Native Americans blessed the town with tribal ritual securing its safety. To this day tornados have skirted the city.

For a great introduction to Guthrie, board a sightseeing trolley for a comprehensive downtown tour that follows historic location markers that tell the tale of Guthrie's earlier days. The trolley also takes you through the mansion district, still impeccably kept and revered. Be sure to hop off at the State Capital Publishing Museum. This brick giant houses one of the nation's largest surviving printing plants. Various historic printing and bookbinding equipment is on display as well as other exhibits on life during territorial and early statehood periods.

Present day commerce ranges from the practical to boutique to one of a kind. A must see is Sorrell's Custom Boots. Prices for a pair of these one-of-a-kind leather masterpieces begin at $3,500.

The Guthrie Chamber of Commerce is eager to help visitors with tour information and a variety of accommodations. More information can be found on their website, guthrieok.com