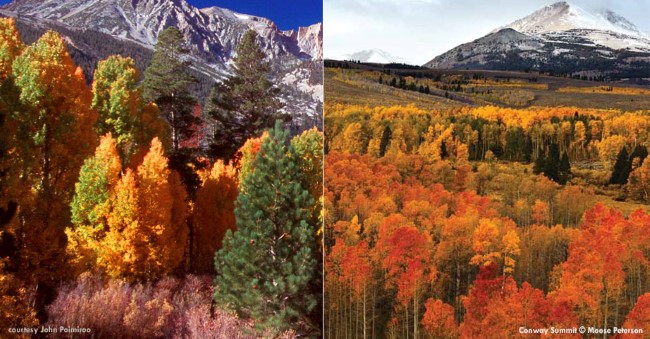 "It’s the earliest show of color anyone can remember. What’s unusual this year is that there is lots of orange and red in the aspen in the Eastern Sierra." – John Poimiroo, California fall foliage expert

It was 86 degrees in my California beach town yesterday. We all felt a little groggy, irritated, and wanted the summer heat to cool down. It is time to feel like a "back East" autumn with crisp, cool air and hint that the maples are getting ready to burst with color. Thoughts of leaf peeping abound.

A GO NOW alert was issued for Mono County Leaf Peeping nearly one week ago!

A USA Today feature touts the National Parks leaf peeping opportunities with absolutely no mention of our California’s National Parks–Yosemite, Lassen Volcanic National Park, Sequoia and Kings Canyon, to name several. It is no surprise...most Easterners don’t know or realize we have a season in California when the leaves change colors. For specifics about this leaf peeping sesaon, I turn to California leaf peeping expert, John Poimiroo. He had some shocking news...the 2013 is going down as the earliest change of colors ever..as long as he can remember. Leaf peeping has already begun in higher elevations of the Eastern Sierra mountains.