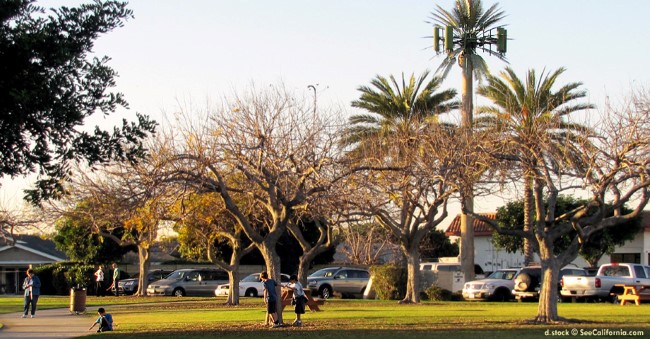 California Town, USA — You wake up one day and there’s an army of trucks in the field outside your house, or down the street at your neighborhood park. You ask the guys with the hard hats who they are and what they’re doing, and they tell you they’re “planting” a beautiful, new palm tree. It will be prettier than any others because it always stays the same color (till the paint chips off) and it will bring you so much more joy. You’ll get better cell service and faster data delivery on your personal devices. Now that’s nice! Right?

“Not so fast,” say citizens who are in an uproar over having fake tree cell towers placed next to their residences! With property values weak as it is, homeowners aren’t ready to take a $200,000 hit on their home values for better reception and many are heading straight to their local governments to voice their complaints.

Soccer moms who suddenly learn that cell towers are being placed on their kids’ grade school playgrounds are protesting and sitting on the ground as bulldozers come to dig it up to prepare for the installation. You don’t want to mess with soccer moms!

With national regulations that don’t allow denying permits for cell towers due to health reasons and possible cancer, T-Mobile, AT&T, Verizon and a host of other providers are installing towers in every city with some residents and workers being bombarded by towers & cell installations everywhere! The cells can be hidden to blend in with a building structure, sit on high-rise roof where you don’t see them, and are even being placed in the columns at gas stations that post the ever rising gas prices. You simply can’t know how much radiation you’re receiving but one thing is certain–rare brain cancers and a variety of cancers are on the rise. Studies around the globe where cell technology has been in place longer than the U.S. show that proximity is a big factor in your exposure risk. If you live within a close perimeter of several hundred feet to a cell tower, your chances for a variety of cancers goes up 20-30% over extended exposure periods, such as living in a house or apartment near these units for a 10 year period.

Last night in Orange County residents of a community next to a wetlands went to city hall and requested that the city council vote to not allow T-Mobile to build a palm tree tower next to their houses and wetlands. One resident was an M.D. and pediatrician who said that she and her children will move if the tower is built. She believes that cell towers can contribute to cancer.

While T-Mobile’s permit was denied and that city now faces additional litigation from the company after denying a permit to place a tower next to a school, here’s what one of the residents had to say:

“Even though it appears that T-Mobile has over 40 towers (estimate) in our city, their application for the site in our neighborhood shows 14 proposed new sites that they will pursue. All of these proposed sites appear to be in residential neighborhoods. By the way, these sites are not needed for their few customers but instead are advertised on their website to sell wireless bandwidth to other carriers.” – Mark Infanti, Huntington Beach, Calif.

If you feel you’re being jeopardized by this form of radiation and care about the health of your family, the closer you live and play next to these cell towers, the more likely you are to get cancer throughout your life. Watch your surroundings, fight against the installations in your neighborhoods, and if you plan to buy a house, be sure to investigate the cell tower installations and requests for permits. You can take a big hit when buy high, then try to sell your home. Finally, consider putting down your cell phone and going back to a land line. It’s still an option.