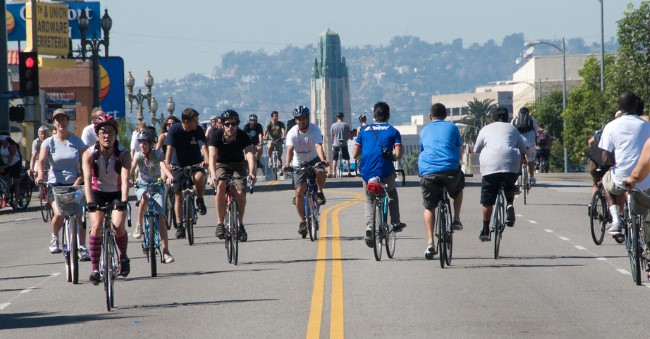 Los Angeles Mayor Villaraigosa Announces Major Bike Sharing Program for City of Angels–Angelenos spend on average 70 hours per year struck in traffic. CicLAvia delighted the car-weary, down-trodden, wheelchair bound, skateboarders, bicyclists, training-wheel t0dders and even pets on April 15, 2012 when the streets of busy downtown Los Angeles were closed to cars so people could ride their bikes in a one day, people-friendly street celebration. In conjunction with the event, L.A. City Mayor Antonio Villaraigosa announced a private bike sharing company will soon be coming to L.A. with 4,000 bikes and 400 stations. Near Olvera Street the mayor unveiled plans by Bike Nation, a local bike sharing company, for a $16 million bike sharing program over the next two years in downtown L.A., Hollywood, Playa Del Rey, Westwood and Venice Beach.

Whether your destination is work, a train, a bus or your local restaurant, these bikes will get you there, said the mayor. The new venture reflects a sea of change in the car-driven city. While over 90% of San Francisco residents are within five blocks of public transportation, Los Angeles is not so lucky. The introduction of bikes and new painted lanes for bicycles will add an interesting mix to a place known mostly for gridlock.

Ciclovias started in Bogota, Colombia, over thirty years ago as a response to the congestion and pollution of city streets.