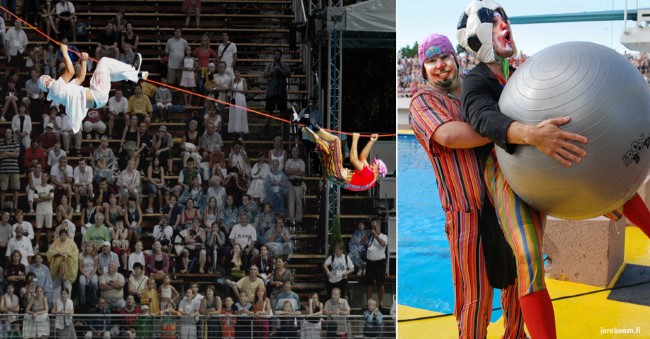 Clowns, U.S. Olympic Divers and young athletes put on a wet and wild show at Belmont Plaza Olympic Pool in Long Beach, Calif. recently. I got to see one of their amazing performances that helped raise funds for McCormick Divers, the official dive team for many young California divers.

Finland's Jerobeam Clown Diving Team thrilled hundreds of smiling spectators with their precision somersaults and stunning stunt dives, involving ladders, bicycles and even fire. One laughmaker waterskied across the whole pool to everyone's astonishment. The fast-paced, multi-talented athletes, dressed in a variety of costumes, made it look easy from every height of diving board.

"We're always trying to come up with new tricks that are hilarious," said Mika Pennanen, 26, who just also happens to be the reigning Mens' Cheerleading World Champion in Partner Stunts. "We take our comedy very seriously and practice so we can safely accomplish our routine, while having fun and exceeding the audience's expectations."

They did just that, judging from the cheering, clapping, whistling and foot-stomping spectators. Debby McCormick, who put the event together with help from friends and sponsors, said she could not believe how many non-divers filled the bleachers. "This is terrific because we want to spread the appreciation of diving and get others to try it," said the widow of legendary dive coach, Glenn McCormick, who founded McCormick Divers in 1968, when the Belmont Olympic Pool opened.

One of Debby's coaches was Dr. Sammy Lee of Huntington Beach, who won Gold Medals for diving at the 1948 and 1952 Olympics. He knew Osmo Meskanen, manager of the famous and funny Jerobean Team but hadn't seen him in 50 years. Osmo, whose clowns perform throughout the World, told Lee and Debby that they would be glad to perform at the fundraiser in Long Beach, which recently was named "Aquatic Capital of America."