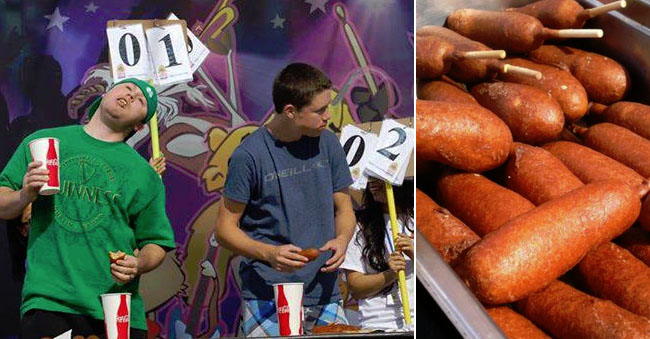 The public is invited to participate in the Annual Corn Dog Championship. Milo Franks' Corn Dog Contest is an annual tradition at the California State Fair. The stakes are high and contestants are amped to win. In one year alone the consumption of corn dogs nearly doubled. You probably shouldn't try this contest unless you've had some previous training as the novice will suffer great discomfort by trying to eat 33 or more corn dogs in 8 minutes.

Registration  is available for a limited time before the contest at: castatefair.org .

2014: 18 corn dogs in 8 minutes and $2,500 dollars in cash prize went to the person who ate the most corn dogs within the time allotment last year.

If you think you have the right stuff, be sure to read up on the legalese before trying out in the semi-finals. Among the wording in the waiver you understand that for injury, death, or property damage, related to (i)  participation in these activities you forever release Cal Expo, the State, the Lessor, any Fair affiliated organization, and their respective directors, officers, employees, volunteers, agents, contractors, and representatives (collectively “Releases”) from any and all actions, claims, or demands.