Down Home Entertainment and Fireworks at Queen Mary 4th of July 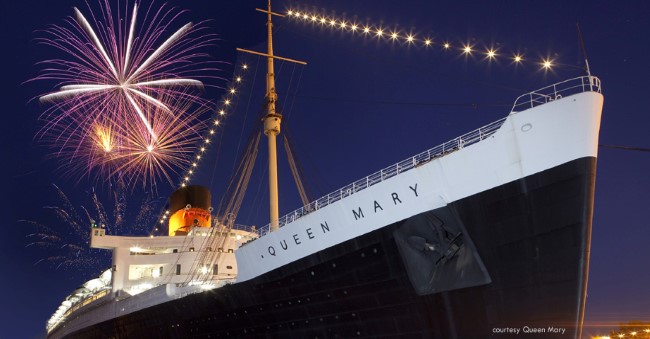 It's the biggest show to fill the sky around the Long Beach Harbor. Queen Mary ship's annual 4th of July celebration complete with fireworks, food and entertainment, offers a day of fun in the Southern California sun with a "Down Home" theme this year. Celebrate the "birth" (of a nation) at the berth!

Popular musical acts include Cajun and Zydeco Grammy nominee Lisa Haley & the Zydecats, a BBQ, outdoor entertainment, or on-board elegant dining and views of the 9 p.m. fireworks show from Sir Winston's. The Queen offers several options for a spectacular day of celebrating America's 1776 birth as a nation. While thousands gather along the shoreline in Long Beach from Belmont Shore to downtown Ocean Blvd. to watch the Queen's fireworks show, the best "seat in the house" is guaranteed at the Queen Mary, where the fireworks are launched over the Pacific Ocean near Rainbow Harbor. Read more...>

Other spectacular ocean-front fireworks shows will include Pier 39 in San Francisco, Huntington City Beach in Huntington Beach, Newport Beach Harbor, and the San Diego Harbor, to name several. If it's on the coast, you'll likely see some sort of display in and around most cities. However, the Queen Mary fireworks show in Long Beach is known for its dazzling display of lights!