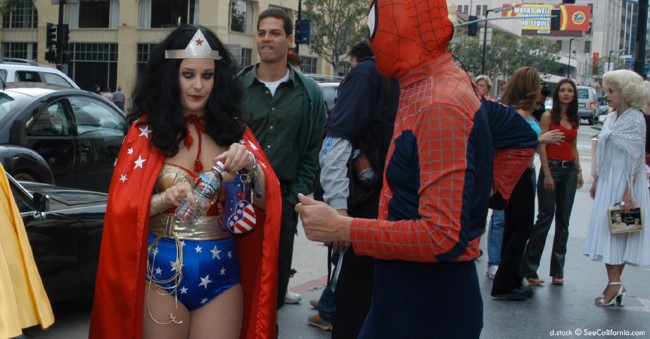 When tourists arrive at Hollywood & Highland, home to the Kodak Theatre and Grauman’s Chinese Theater, they begin to see the Hollywood reality, cheesy look-alikes for celebrities, posing for tips. Some resemble real life actors or fictional movie characters, but the crowds really don’t care. People from all over the world want to experience a Hollywood of their imaginations and this is where it begins, next to the Hollywood Walk of Fame. (If you visited a few days ago, you may have gotten a glimpse of Melissa Etheridge getting her star on the walk.)

For those who go to Hollywood to see a celebrity, the going is rough. Even TMZ got in the game with a new van tour launched in 2011 partnering with Starline Tours, but providing its own on-board celebrity-hunter to guarantee you’ll have at least one celeb sighting. Times have been tough for this venture, which is not much different from the rest that have offered similar tours for over 25 years. Maybe you’ll look at a house, a gate with security camera, and similar such views from streets where actors or TV hosts reside, and your tour will mostly be filled with stories of past events. Constrained by time, the buses and vans are generally unable to venture to Santa Monica, Malibu and other locations where there’s ample star power.

With GPS and phone aps, many tourists are taking matters into their own hands, attempting to hunt down the hot spots and icons on their own. While it has empowered tourists to explore Hollywood on their terms, it has became a sore subject for locals living near the Hollywood sign. The traffic has become so intense, neighbors are angered about the trash left behind, the invasive and often disrespectful visitors to their remote streets not equipped for the sums of traffic that have appeared with the advent of the new tech tools. Oh– it’s so Hollywood!

Hollywood is part of the City of Los Angeles, and the city council is currently discussing methods of mitigating the traffic impacts. Ideas have include shuttles, tram tours and other such ideas. But star power brings big bucks to the city of L.A. and a few complaining neighbors aren’t exactly top on the list of concerns in the cash-strapped City of Angels.

In the mecca for Halloween celebrations and adventures, it’s hard for look-alike actors to earn money around the Halloween season as the streets are invaded with great costumes. The street artists work for tips that don’t flow so readily when there’s an abundance of costumed characters to photograph.

But on nearly any given day of the year, if you want to take a picture of a “celebrity” or character from a movie, head to Hollywood & Highland. You’ll find it there!