Get Your Kicks on Route 66 in California 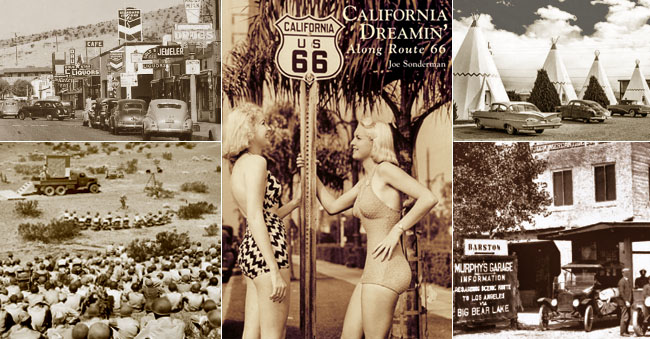 America’s legendary Route 66 winds its way through the heart of America in a 2,400-mile ‘Main Street’ between Santa Monica beaches and Chicago’s Lake Michigan shoreline. The dirt-covered highway that John Steinbeck called the Mother Road in “The Grapes of Wrath,” led Dust Bowl refugees from blinding sandstorms and blowing tumbleweeds in Oklahoma to golden, sunny California.

Route 66 leads through towns in Oklahoma– Arcadia, Foss, Elk City, and Texola–the same path that soldiers traveled during World War II, perhaps taking their last automobile ride before shipping out of California for the Pacific theater.

Neon motel signs in Tucumcari, New Mexico are part of the sights and famed road remembered in a 1960’s show, Route 66, where two young guys, Tod and Buzz drove a new Corvette in search of America’s promise and adventure.

Yes, that Route 66. The subject of a popular TV show of the same name, in which two young men called
Buzz and Tod, driving the highway in a new Corvette, taught America – and the world – that Route 66 is a
road filled with stories and adventures and dreams.

Remember the song, Get Your Kicks on Route 66? That was composed in 1946 by American songwriter Bobby Troup. It was first recorded in the same year by Nat King Cole, commemorating a road that opened in 1926 and decommissioned in 1985. Each year a decommissioning celebration occurs to remember its place in history and celebrate the icon of American car travel that Oklahoma Highway Commissioner Cyrus Avery (working on a special federal project) designed and got “66” designation way back in 1926. See California Route 66 cities.